I got my stickers and that means I'm starting the countdown! 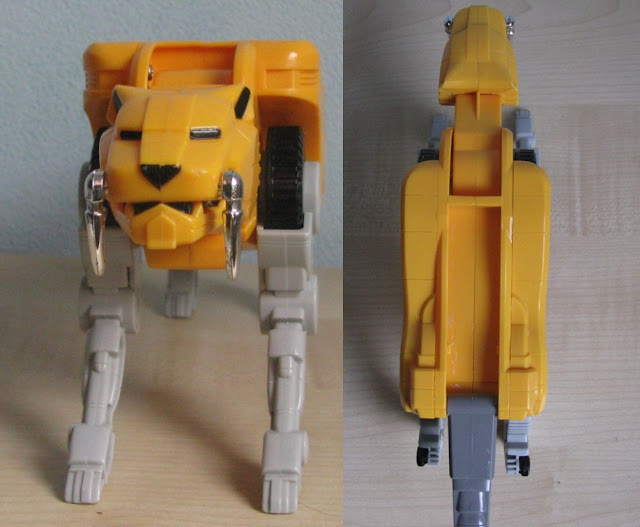 This thing wasn't that hard to clean but It costed me more time because the 20+ year old stickers weren't budging, even with extra heat an moisture added to it. 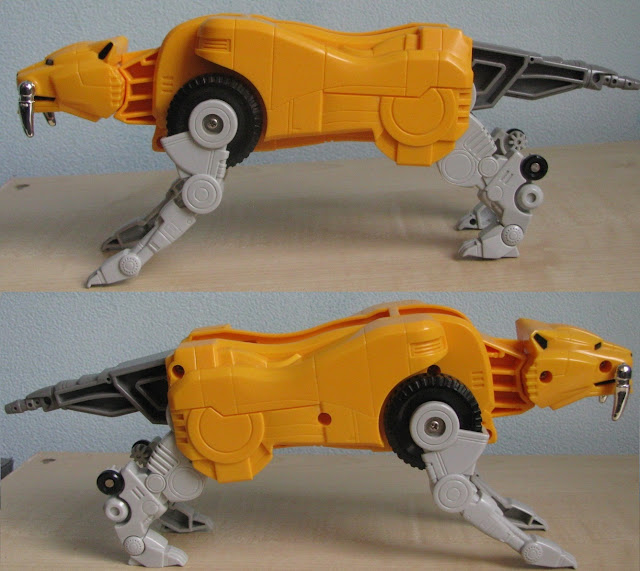 The most annoying stickers where to the side and on the top of the back. The sides where annoying due to the many groves and details underneath and the on the back was so damn annoying because it was the one which was the most stuck on and I had to peel it with that cannon in the way. 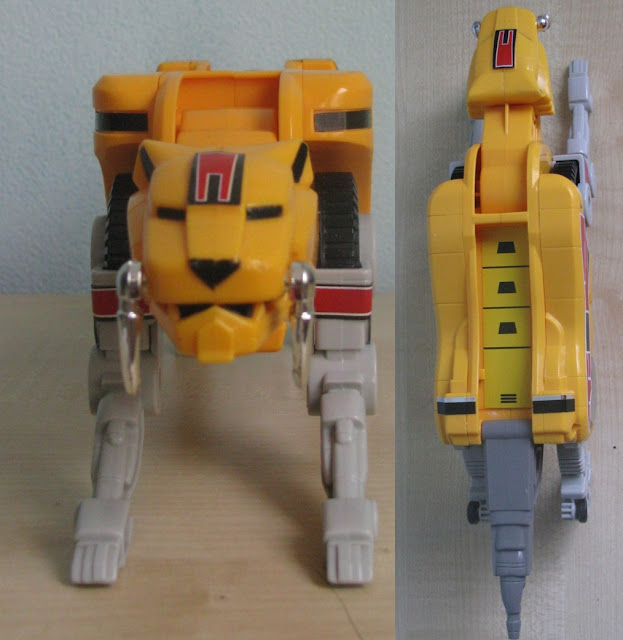 But the result is awesome. The only that annoyed me was that annoying sticker black/silver that is located on the to in the back. One of those stickers just refused to stick. Its getting loose once in a while. Maybe I should glue it? hmmmm 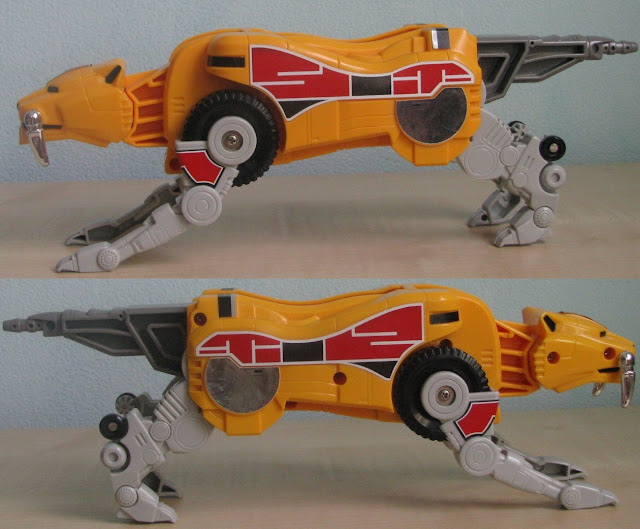 On the sides though... Man this thing looks way better then when it had the blue stickers Bandai America put on it (damn them) I see no faults here. I am so happy I got these.
Guardian Beast Triceratops / Triceratops Megazord 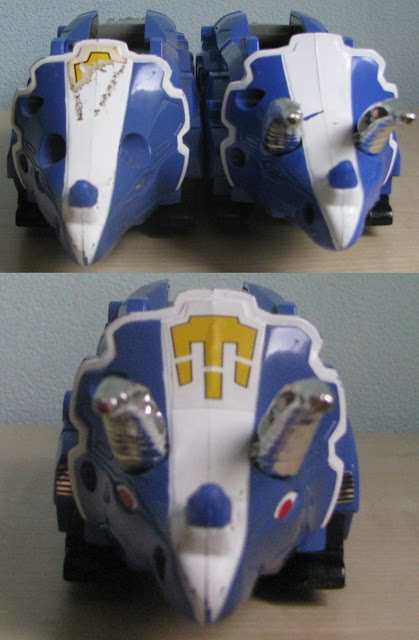 Now for Tricera its was a bit hard. Since I got to choose from 2. I found one of them at a second hand store. It practically called out one me. That be the one in the first photo with the stickers still on. I decided to go with that one because it didn't have that blue scar I kinda dislike. But don't worry, Its still getting the reprolabel treatment as soon as I get a Dragonzord. The stickers it got now gives it more character. I am so glad I instantly bought it. 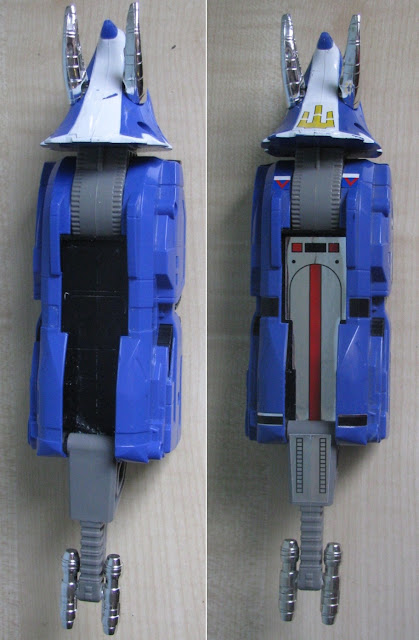 The old sticker was hard to clean off and the new stickers where hard to put on. I am happy with the results... Kinda. I dislike how I did that big sticker. Its not 100% in the right place, even though I did try to correct it.

And on the sides its not really much of an improvement. Sure the stickers are cool and it does bring it back to live more. But I do get the feeling that I am missing something here...
More Tricera 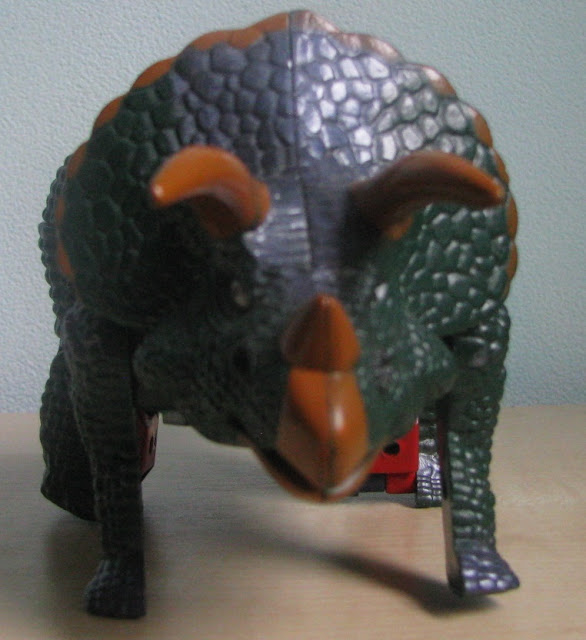 I am not done yet! This is Slug's long-lost dino brother.  He's not as mean-spirited but he's still quickly offended if you smear at his badly designed robot form

His Triceratops for though is okay, as long as you don't transform his hind-legs wrong xD His transformation sucks though. Because you have to split his waist and tail. Its hard to put back too.

And his robot form... Now you see why his Cybertronian brothers would l0ll0l000l0l0l00 at his robot mode. He was better of keeping his proto-form because this just does not work outside of combat. For one thing just talking to his fellow Autobots pretty much ensures that their optics get removed by the horns and that they codpieces get snared be the beak xD 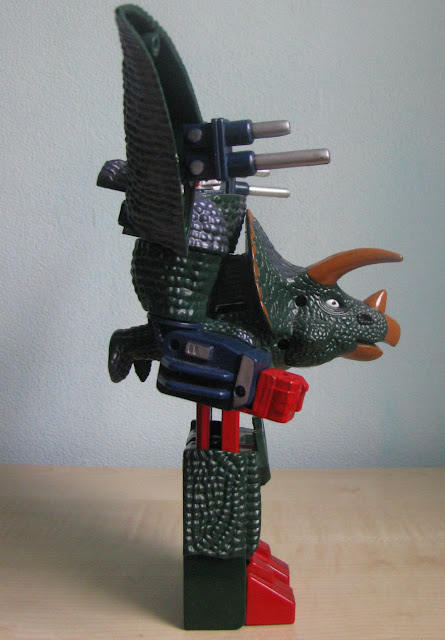 Plus most of his kibble is in the front an spread out to the sides. He can't get trough any door with all this kibble. Sure the shoulder cannons can point at any direction and the Triceratops head is good for defence. But this is just an horrible design over all xD

Any way now that I got this bootleg out of the way I can put it back on display next to Catilla. They look great next to each other. Almost makes me wish I had, Swoop, Grimlock and BW Neo Big Convoy to put them together xD

This was the first of my 3 count down blog to the 100th on my TokuTeaRoom blog and also celebrating the upcoming 20th anniversary of Power Rangers. I hope to finish this up quickly and get onward to even more awesome stuff! Also be sure to visit Reprolables.com for awesome G1 transformer stickers and from other shows like Power Rangers
Gepost door Kelleth op 09:54