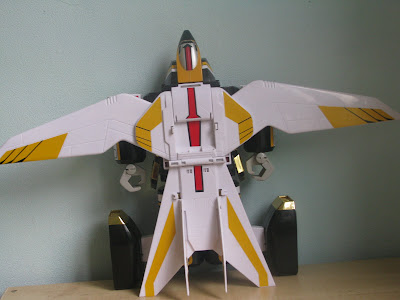 Man this bird mode is EPIC!! It easily falls apart because of the weight and the weak tabs but other then that its size makes it pure awesome!! The pictures could have been better. But I sadly don't own the many Tamashii stages that could have hold it up xD
Jet Garuda 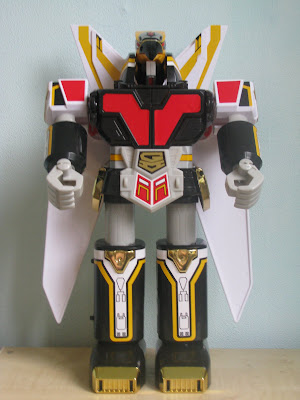 So yeah.... When I actually changed this thing for the first time I didn't really noticed HOW F#ING HUGE IT REALLY IS! My god this is where the €30 went!! In the shipping cost for this damn thing!! Aside from that remark I really like this thing. Its mostly the same size and quality as the original Garuda. The only real difference are the chest piece stickers which where diecast on the original if I recall. All this thing needed to have are new sticker with silver lining all around them. Also about those weak clips, When clipping on the left the panels that keep the chest together aren't that tight. So when I try to clip on those legs the 2 parts keep bending in really scary ways. I <3 the wingspan btw
Size Comparisons
Damn this thing is fun to put next to another bug mecha and comparing the sizes lol So yeah here's some pictures to compare it with: 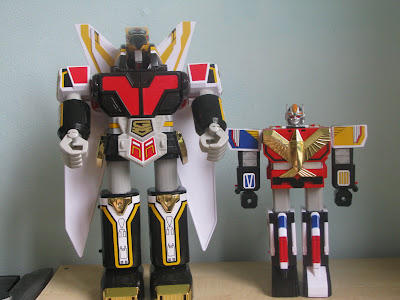 First the most logical choice, comparing it with Jet Icarus.... You can see why I think I bought Garuda instead of Icarus xD 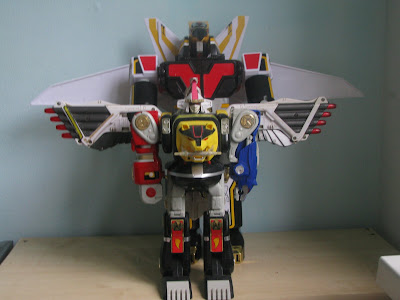 With its wingspan it trumps the Super Kakure Daishogun's / Falcon Ninja Megazord's wing span by just a bit. 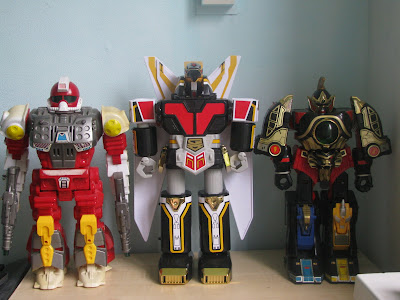 And now with the two biggest bots I got. Big Albert and the Thunder Megazord! Man these get owned easily xD 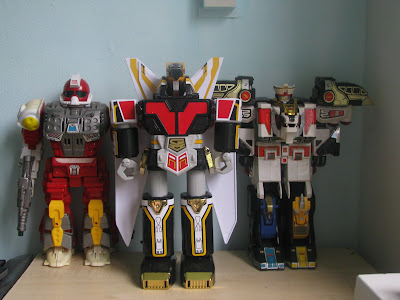 Not much more to say about Jet Garuda.... But I will post the next and final blog as soon I can. laterz :)
Gepost door Kelleth op 11:55 1 opmerking: