I was happy that Hikari Senshi Fansubs has started subbing at least the first 3 of the 4 episodes of Jushi Sentai France Five but now It turns out the founder of the France Five project SGTKira has found out about the dvd versions of this series and is planning to restart the project with better encodes and the help of Zetta from MCS. This means they'll probably be doing episode 4 too. They even released an trailer:
But that is not all! It turns out that Alex Pilot the director of the France Five franchise since episode 2 has claimed that they'll be releasing episode 5 on the 5th of May 2012... 555... Funny... WE WAITED 8 FUCKING YEARS!!! And even worse all the filming was already done in 2005. The editing just took a long while to finish.... Or they where just sitting with their asses on their porches eating salami, cheese, and bread panne a panne while sipping whine... Sorry I am just pissed about the only needed to edit stuff part! 8 YEARS! Damn you!! I hope its fucking worth it! Any way here's the trailer for that if your interested:
And some more good news is that the crew seems to be talking about maybe making a blu-ray set or something around that format. I hope they do because I've been looking at the sucky encodes to long. Also I am now having the dumb idea of buying an extra ranger key of say... I dunno Go Red or something and maybe make a custom key for Red Fromage. But I'll probably screw up. I need a white marker for this and probably a Gundam one this time

And Another Thing
My room is still a mess. I need a new bed some boxes to store stuff away upstairs and there's still mould issues. But at least I found a way to display my Sentai Mecha/Megazords in my closet. 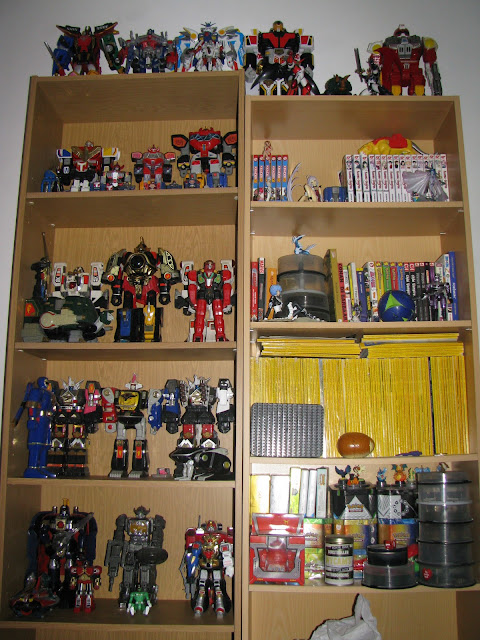 I just need to clean out some more shelves just in case. 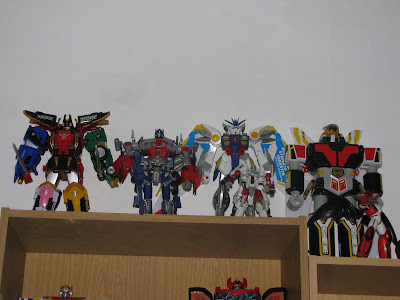 I've tried to put Gokaioh on the selves but its just to wide. I honestly think Bandai Japan is trying to make the collector's not want to collect Sentai mecha. This guy just takes to much space! 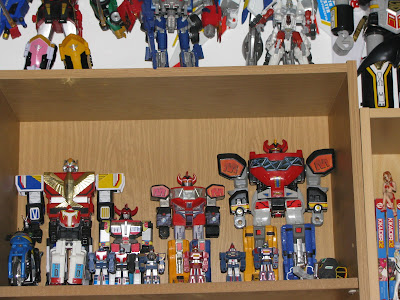 I made space on top because next year in Augustus I'll try to get and unofficial Turbo Robo and Turbo Rugger. I just hope they still are available by then! Also I think this is where I am going to put the Ranger Keys :) 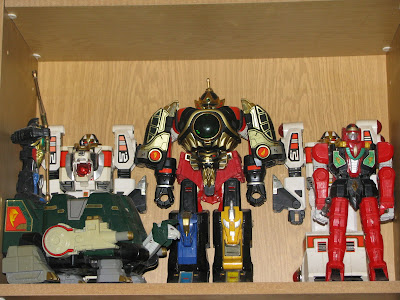 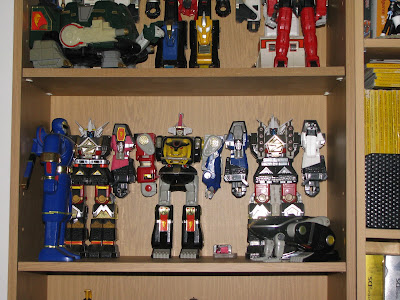 Same a for Kakuranger, to many doubles lol. I honestly hope that I'll be able to fix up the Muteki Megazord with better paint and buy some reprolabels for it and maybe a new chest piece (saw a few on Ebay) 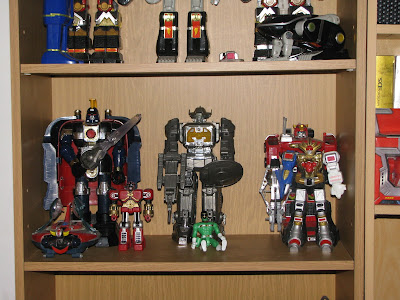 I honestly hope that the KO Deka Robo and KO Magiking will fit on this shelf because I don't really feel like emptying another one lol Also I plan to get the KO versions of Centaurus' of Magiranger. All 4 variations in 1 go. I honestly hope to finish this in one go. 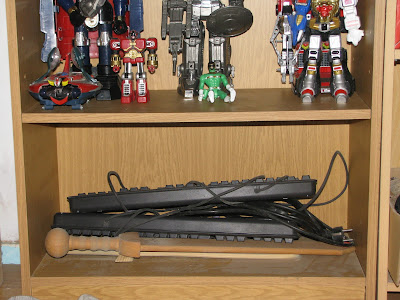 Reason why I don't want to clean it. I honestly dunno where to put these xD I'll probably throw them out or something lol

Any way I have to get ready for work bye!
Gepost door Kelleth op 22:40 2 opmerkingen:

I planned to get an Astro Megazord for a while now. Mostly by lurking on Ebay and such like a predator hoping to catch that one auction that is ending cheaply. Sadly I had no such luck. And with the current money issues due to the Bhiner fuck-ups professionally made by yours truly, it was even harder to find one to buy. But luckily I went to Markt Plaats which is the Dutch Ebay (and at times less reliable) and I succeeded in getting a KO version I wanted to buy about 7 years ago but couldn't because I was poor... Any way it was for a decent price just €8. The lady was even nice enough to come here and give the thing personally. And with that here's an toy commercial that did not make me want to buy it (that was PRIS fault) But certainly helped ALLOT on that part.
The Box 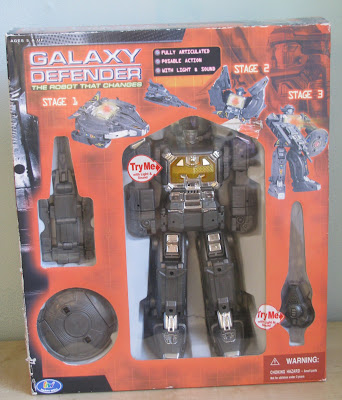 The box could have been smaller by packing the KO megazord in ship mode. And that did not get through to them. But at least it try to be better by displaying the items that are packed in there. It survived pretty well considering its like 7 years old. Weird how this mecha is always associated with either Galaxy or Mega. Galaxy Mega, Astro Megazord. Galaxy Defender lol
The Mega Shuttle 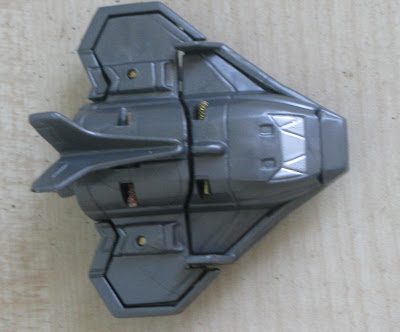 From what I got the original Astro Shuttle and its Japanese counterpart is really a fun little thing that rarely gives any trouble to the collector.... Well this is its evil twin people! Unlike the original it has nothing to keep the two halves together, So the back being heavier then the front kept falling apart. I really wish they'd give the thing clips to hold it together. At least it got the Mega Booster right! right? 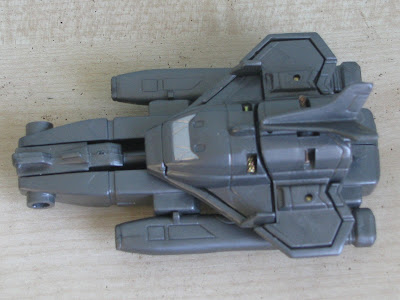 Well almost right. It BARELY clips on to it but it looks al right. Lets see if it stands! 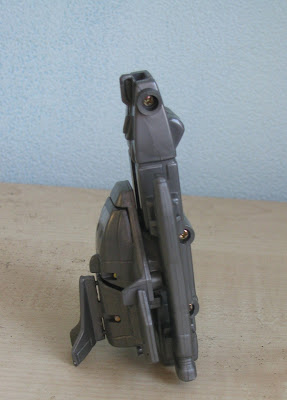 Nope... The only thing keeping it together is two fins on the back of the Mega shuttle. This is because the 2 pieces aren't exactly in synch. One of the two pieces that make up the Mega Booster is a bit bigger then the other. And as soon as I pick it up the back fall off again. Not exactly a let's rock it! xD
The Mega Ship 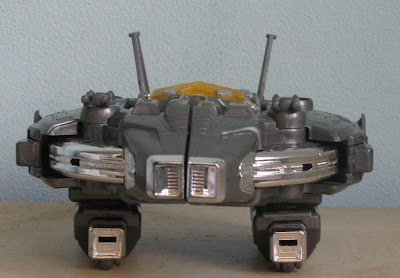 As ever the one way to describe the Mega Ship is EPIC!! Its so iconic that even when its grey and void of any stickers its still awesome enough to just put down on a shelf. 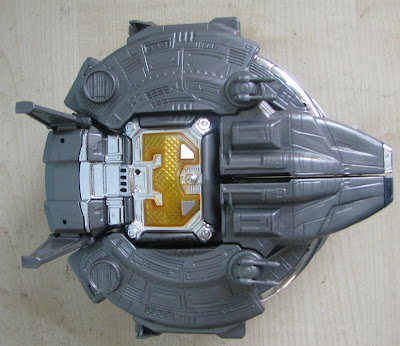 The M for Mega is yellow instead of the regular red. And from front you can see that the two parts which will eventually for the feet of the Megazord don't exactly click in well. I think this is because its missing some clips just like its shuttle. But then again this is not that annoying. It works that's the important part.
Combined Mega Ship 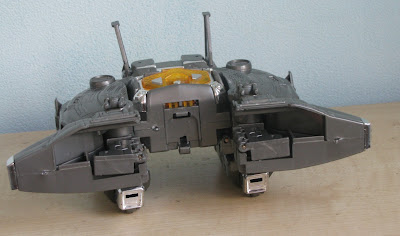 Just like the original from PRIS and Megaranger this Megaship can open its docks/feet and combing with the Mega Shuttle to form a whole. This process however is VERY annoying compared to what I've seen on several reviews. For some reason the shuttle is a little bit bigger then the original whilst the Mega Ship is in exact scale with the original. Combined with this fact that the Mega Shuttle has no plugs to keep it together (meaning it keeps falling apart whilst plugged in) it a big hassle for something so simple on the original 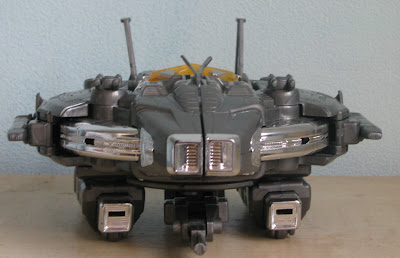 One of the many things I like about this mecha is that its has the ability to store its weapons at least somewhere. Its Mega Shield can plug in to the bottom of the ship and the Shuttle Booster can change in a cannon which plugs in to the shield. (also this is when I found out one of the arms isn't exactly right, it keeps leaning to the right and never clicks in place) The two extra fuel tanks that plug in to the Shuttle Booster easily plug in to the sides of the Mega Ship. Which some how actually increases its awesomeness level by 20%. 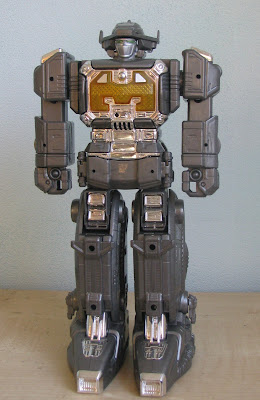 Now we moved one to the Astro Megazord where we finally address the electronics of the M. Unlike its two original counterparts this thing does not make sounds when docking the head nor does it make the exact sounds the originals had. The left button activates a gun sound. The right button activates a gatling gun sound. Pressing them both will activate a laser sound. The buttons should have been yellow instead of silver IMO its just a bit annoying. Now to the mecha its self, It its AWESOME first off its not totally grey it has little veins of lighter grey and silver covering it. Those had me worried at first but I found out its not really a plastic defects, but rather just but moulding. Which is actually something I like. One thing I did not like is the fact that it kinda leans backwards for some reason. It doesn't worry me because its always against a wall or in a cabinet but when taking photo's it was a bit scary. Also for some reason the battery clip on the back doesn't click in right. It always shows a little bit of space. This is annoying when I want to combine the Mega Shield to the ship mode because it keeps falling off if not clipped on really tight. 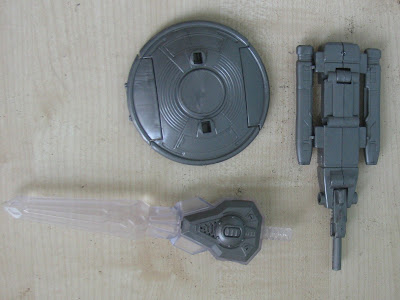 The weapons are grey as well. They had stickers but I have removed them like I did with the Megazord. This is because I have the faint hope the Reprolabels will some day release the sticker sheet for Galaxy Mega. But its probably not going to happen any time soon. First we have the Mega Shield which is exactly like the original version except that its grey. It can plug in to the bottom of the Mega Ship like the original and it can be held like the original. Next up is the Booster Rifle which is formed from the Shuttle Booster. It is pretty bland but that's because its grey on grey lol. 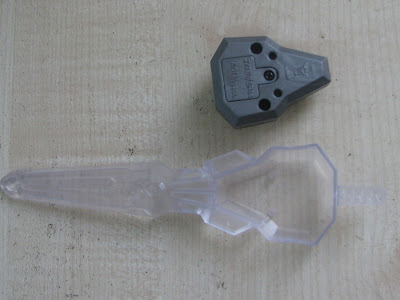 Lastly is the sword...  Which is a completely different sword form the original. Instead of being the sleek rounded one piece sword that I love, I got a huge transparent sword with a light box to light it up. I haven't changed the batteries yet but I already know its supposed to be red. Sadly even though it is an awesome sword I don't think it really fits the Galaxy Mega / Astro Megazord. So I have it to the only other Sentai mecha without a weapon that can hold it. 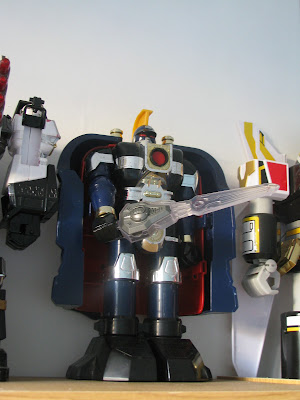 And it looks awesome! Gunmazin is pleased! But at least the KO Galaxy Mega can hold it too. 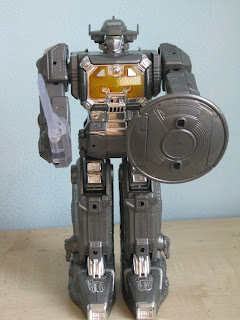 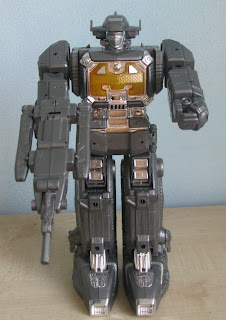 And just for the lolz they also seemed to have copied the original instruction sheet too! 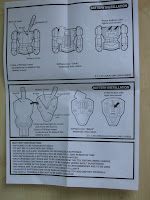 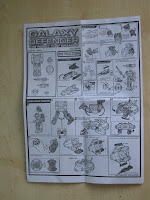 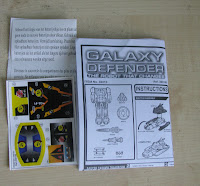 I am keeping the sticker sheet but I won't be using it. I feel it harms the subtle designs of the Galaxy Mega. Its the reason why it was almost sticker free in the first place. Speaking of the original Galaxy Mega. This thing doesn't have the plugs it needs to combine with Delta Mega / Delta Megazord. This initially made me sad because its my favourite Sentai combination ever but then again some day I'll get my hands on it... Maybe after getting that Dragonzord first though lol. Any way here something to finish this blog off!

MV made by TheIchipai  ©Toei LTD
©Saban
Both openings are so awesome!