This week we celebrated the 20th anniversary of Choujin Sentai Jetman! And weirdly enough this is the first time I actually can buy stuff on-line. So I bought the recently released Jetman set at KO Toys for my birthday. This included Jet Icarus the mecha of the Jetman. And in the light of Jetman's tribute episode in Gokaiger, I will gladly show this thing off ^^
Jet Condor

Lets start with Jetcondor the Jetmachine of Black Condor aka Gai Yuuki. The most manly and awesome Sentai hero of them all!! He's the one who returned for this week's episode.... Even though he may have died at the end of the series. This thing is 99% the same as the original toy. The only things that had been changed are a few stickers. Most notable the Jet Condor text line needs to be red. 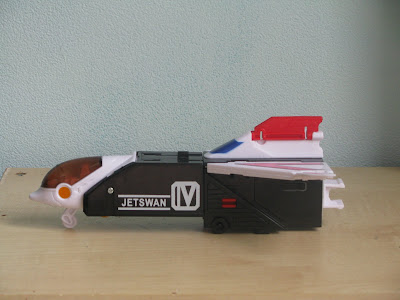 Jet Swan is the same deal just different wings and a different cockpit. The white kinda sets of the colour scheme of this plane. But between the 3 jet types for the main 5 mecha I do like these the most 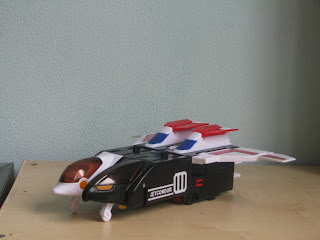 Yeah its not official AT ALL. But I like toying with the idea that Gai would help Kaori out because she's afraid again. And the two discover not only a double flight mode but also a tank mode xD 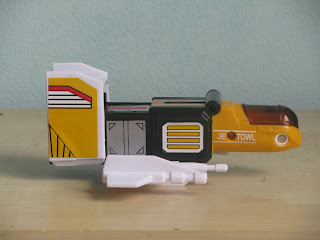 Jet Owl is pretty! That is.... from one side... Yeah apparently the Chinese company that made the KO was afraid that kids would switch  around Jet Owl and Jet Swallow. So for each its yellow on the right side and blue on the other side. And Stupidly the numeral stickers where switched too! So I got a stanley knife and switched them around xD Not much else to say here. I do wish they included some claws though much like those used in the series. 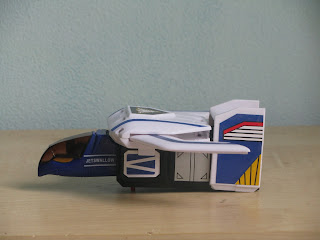 I like this one more the Jet Owl. I think its due to the shield of Icarus actually becoming the wings for Jet Swallow. But the shield itself is a bit annoying as the clips that hold it together are uneven. And I am frankly sad that the didn't take the trouble to correct the colour to the actual light blue its supposed to have. Still I can look past all that. I like the cockpit of this one. Especially the point forming a beak. ^^ 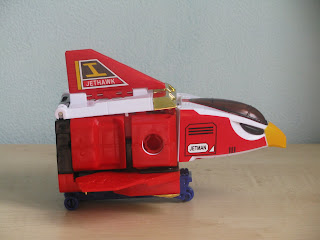 So much FAIL! I mean man this thing sucks! Firstly I knew it would turn out to be a blocky chunk of plastic with the connectors where the arms a supposed to connect clearly visible. I also knew about the crappy hiding system of said wings. But what I did not know what how messy it is to form it as it is. Its like its missing a whole lot of connection tabs that are supposed to keep everything together. But that ain't the real problem. The head/cockpit is the problem. I know its supposed to turn inside the body but somehow they made it so that the head always tilts down all a bit so everything comes loose as soon as one breathes on it or even looks at it. Lame Red Ranger mecha is LAME!

So this is Jetman's full on homage to Gatchaman! Icarus Haken! Its cool. but putting it together and taking it apart is a bitch to live through. Even if you got the Swan and Condor parts in the cockpit/foot part keeps coming loose so you'd actually have to be very careful picking it up. Also the sticker are reverse on the Jet Hawk part. So it actually looks to be upside down. This has annoyed my so much that I tried to carefully remove the stickers and switch them around. But sadly from the first second it looked to be a failure. the stickers are very thin and the glue is really strong. So I got not choice but to leave it like that!. Unless Reprolabels come out with their stickers I requested like twice now. 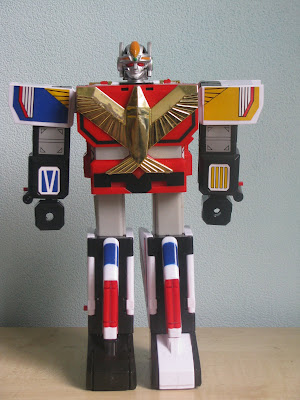 Forming the Jet Icarus is not as bad as CCLemon99 claims IMO. I liked putting it together and the steps are fairly easy. But I do agree that this thing didn't deserve to be a die-cast bot. Its pretty fine for a KO btw. The part where metal used to be are pretty solid. Even without the metal. And though the chrome did get damaged on the trip from Hong Kong its still a good grade for a 3rd party company. There where a few annoyances though. Mostly stickers of course. Firstly both feet need stickers. The Condor part needs a white sticker with a vent pattern on it, and the swan part needs a similar vent sticker too. Also the numeral stickers on the arm where switched around. So blue was on Jet Owl and Yellow was on Blue Swallow. Like I said these where easily switched around but where annoying non the less. Putting that all aside I love the design of this thing its so old school! and this before the DaiZyuJin who took a massive leap to mostly non-boxy looking Megazords. I like the blade and shield. But I can't seem to let it hold the damn gun upright with out letting it fall down. So I had to put it like its aiming at the sky.
Overall I am very happy with this buy especially with that great timing of mine :D Lets leave you guys with something AWESOME!:
I'll change the actual video if it turns out to be really really slow. But I'll only do it of TV-Nihon releases their version.
___________________________________________________________________________
Editor's Note: Due to a annoying bug on Animevice I've been unable to use the gallery feature I've grown accustomed to. Which is why I didn't post it when the episode actually aired. Luckily my mother allowed me to finally use her browser and it turned out the bug wasn't around on this thing. So I got to blog it any way. Better late then never I guess.
Gepost door Kelleth op 19:45 5 opmerkingen: