Devilly is a very special character to me. Months before I wrote her story down on paper to learn better English. I dreamt about a cute short girl with and adorable smile. I finished the stuff, but looking back it sucks. So when I transferred her to Comicvine and then to Animevice I changed her story just a bit. But its already been like 2 years since I last touched the page. I keep trying but the writing block kept coming up 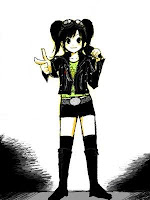 And yesterday being nauseous and having a plugged ear, made the foolish mistake of staying up to late.
So I went to bed and I had a dream. This dream was pretty normal because I knew of the ghost who sits on beds. I was expecting her to taunt me again because I was complaining on how it always feels like the bed is being pushed down (no time to explain this just go with it) Any way, Instead of her I saw the girl again. who I knew a Tsukino aka Devilly. The character I neglected for a long time now... And she look angry. She popped up her nails and showed her fangs. And she pierced me with her nails trough the throat. And yet I was al right. For some reason I had a shot gun next to my bed and I shot her multiple times. Even though I knew that would not work because she has Wolverine wishing he had her healing factor. So I ran and I ran but as soon as I when to the street she picked me up from the sky and dropped me on the roof. I stabbed her in the arm but she ripped it off and it grew back. And then she ripped my arm off. And then a leg. Till she made a bone spike and stabbed me with it. One does not fuck around when fighting Devilly. She's seriously scary once she's fighting  0_0 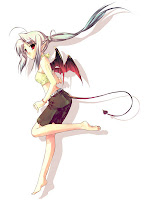 Then I woke up,  It was 12:24. And of course my ear and head still hurts. I took a shower, made some good food and sat down before going on the laptop. I immediately posted about this on twitter. Because this dream was weird. Especially how Devilly was acting, totally not how I dreamed about her nor how I wrote her. It was more like I was in a vampire movie a better one than those about the sparkly pieces of shit. I was acting wrong too. I wrote about her powers... Non of that would help... not even if I chopped her head off... In fact letting her bleed gives her another more painful way to kill me... I would try to do things differently. Like try to capture her and her poor escaping tactics. Which would help more in my dream seeing how she was acting pretty mindless.

I think I am going to add her to this blog but only when I did a few more toy blogs because I frankly have waited to long already. And now I regret writing this down cuz now I can't forget about it xD
Gepost door Kelleth op 11:40 1 opmerking: