Yeah, Yeah. I know I wanted to do this in order but due to TaoBao and Bhiner sucking I have to wait till next month till I get my ACTUAL belt. So instead I'll start with the my Mars Hero Weapon set.
This video shows the various weaponry of Mars Hero from Armor Hero XT. One of which I am not planing to own for a while. 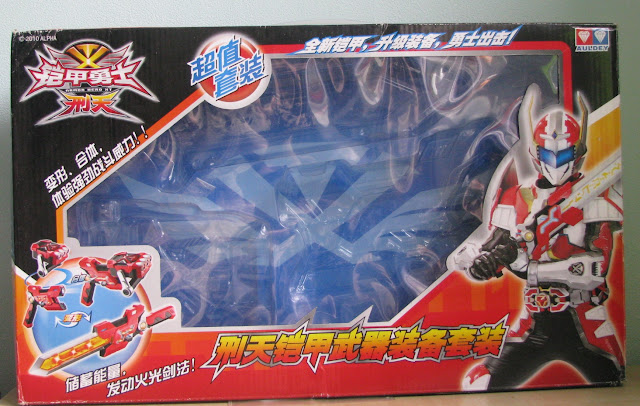 I was relieved when I saw that this box DID HAVE the Auldey symbol on it. Because the bootlegs suck! Combined with its content this baby weighed a total of 2.5 kilograms, so this was a big part of the shipping costs... The box is nice for a Chinese Toku though 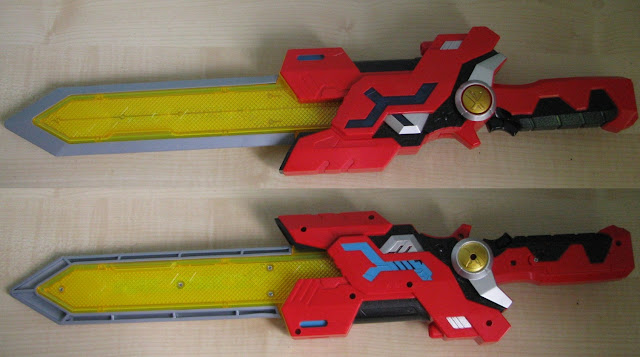 Out of the box the weapon is made of PURE AWESOME. Love the design of this thing. Its a decent blade and it fits quite well in the hand. The clear yellow plastic is part of a light gimmick, having several lights that go on as soon as you hit the button. The only problem I got from this is that without the footage I posted above about I wouldn't know which end of the hilt to grab, because it weight is unbalanced at the hilt lol

Now for the reason I bough this thing. THE GUN IS AWESOME!! Man I am glad I made this my personal Reviewtopia weapon. Its not that heavy, it has cool lighting effects and it actually feels like a Japanese DX toy. The only problem though is (because its Chinese) that no matter which mode its in the sound effects always starts in sword mode. Its kinda weird having a gun that makes sword noises. 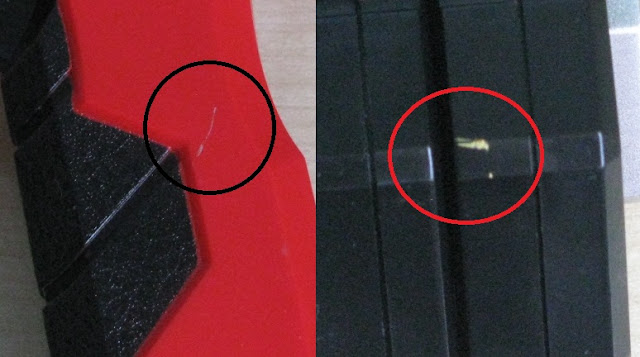 One thing I noticed immediately is the stray pain streak on the hilt. At first I thought it was a testament to cheap Chinese manufacturers, And that Japanese toys would NEVER have this problem. But then a few months later I got the Legends Mobirates and what do I see on the side? A streak of stray gold paint lol So I guess I can forgive this. But still I had to point this out. 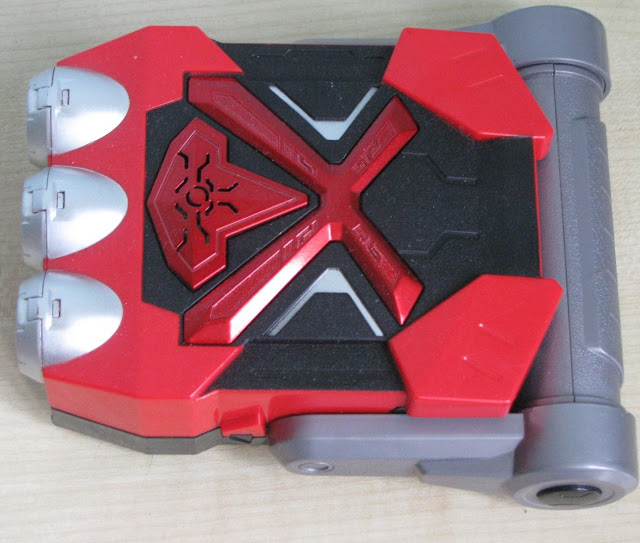 Next up is the Mars Knuckle. Which is fairly large for tiny Chinese kids, But good enough for 20+ year old white man-childs like me. :)

Its exactly what you think its is. Its a complete and utter knock-off of the Faiz & Kaixa knuckles from Kamen Rider 555. Without the Memory ofcourse. But I can forgive this. BECAUSE ITS SO AWESOME!. Love the chrome red symbol on it and love the sound effects. + It has one more use compared to the ones from Kamen Rider 555. 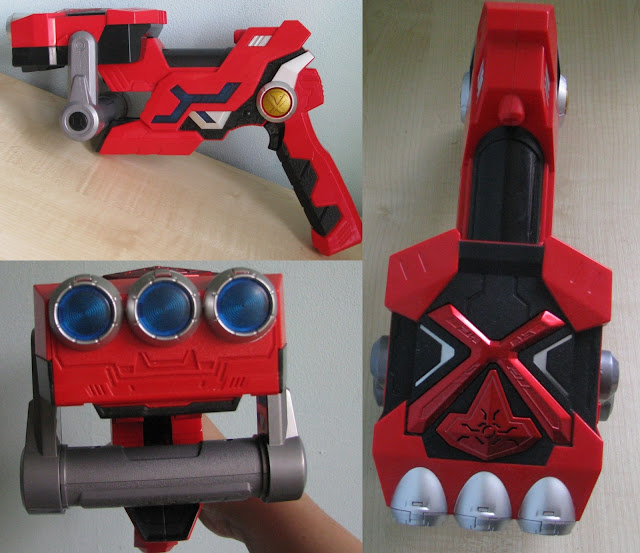 It combines with the Mars Hero gun to form a big glorious bomber gun! And the sound effects are awesome. When you plug it in you actually feel like its meant to be together. The front might be a bit heavy but that's because its supposed to be held with two hands. 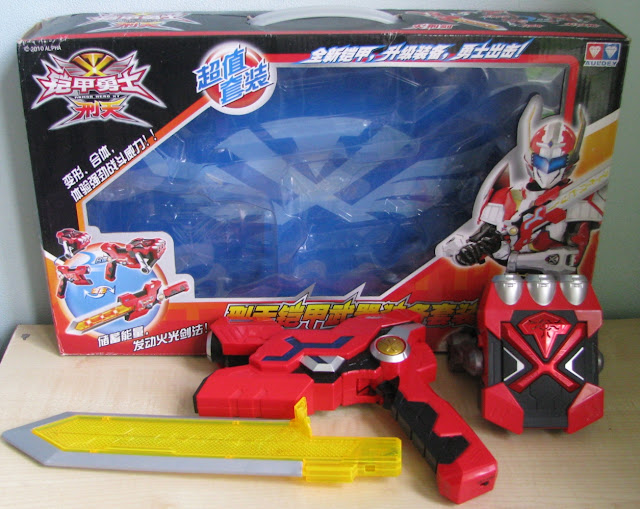 And that's about it for the weapon set. I hope to pay for the shipping costs of my Chinese toys in July. Till then lets hope the people at Bhiner don't use it for Shaolin practise...
My other Weapons

The other things I got is this Gladius I bought at Archeon here in Holland. Its been scaled down. As such it almost fits perfectly with my Mars Hero Blade. 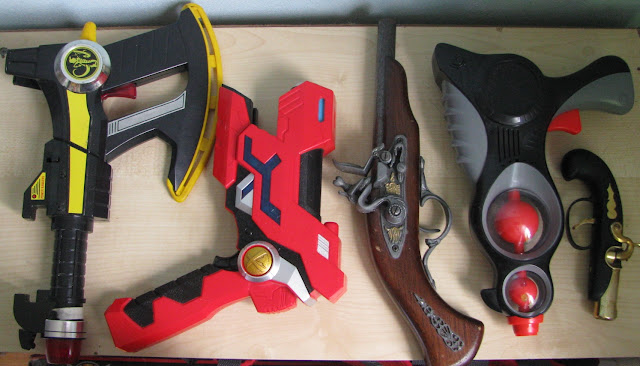 Next to that I got my Mammoth Breaker. 2 magic guns, one small one big and a sci-fi gun I owned for years.
The sci-fi gun was made by Simba a company that mostly makes sticker books from things like Power Rangers, Gatchaman and Disney films. But is more well known for the monopolistic distribution of the blatant My Little Pony knock-offs called Filly. Which dominate the toy market here leaving no room for Friendship is Magic... They are EVIL. Also the gun, yes it was sold by Simba here in Holland and its awesome. But the true copyright belongs to Gealex Toys. So yeah EVIL 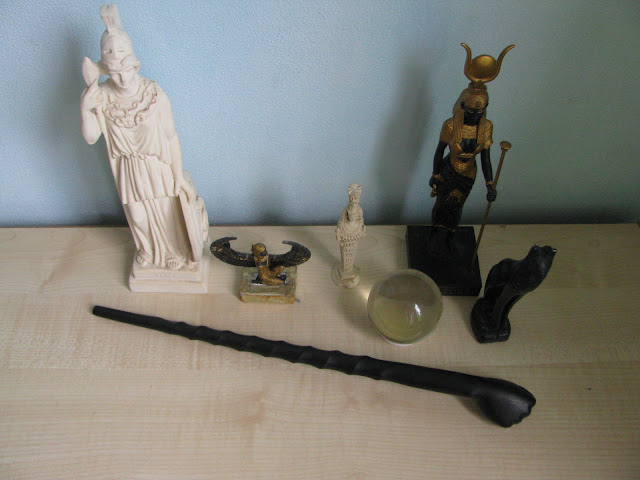 Lastly my magic stuff. Yes I own these :P Got my wand which was a candle dimmer about a century ago. I got 5 goddesses. Bast, Isis, Ma-at, Athena and Artimis. Love all these statues. Love all these goddesses in mythology too. O right the orb. Nothing much just a crystal orb I got at a convention for just €5. lol Any way this was my blog. I hope that everything I ordered comes home save and sound. bye :)
Gepost door Kelleth op 08:44 1 opmerking: