So this is my first and last toy of the DX Gokai Machine line. The others are either to expensive to or not really worth the trouble. 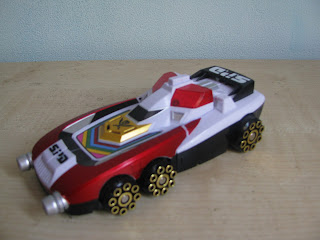 The reason why this is my first and last Gokai Machine is simple. I just <3 Dekaranger! Not only that but I always loved the Deka Machines especially Pat Striker with it streamlined form. The moment I saw the first pictures in the rumour thread of HJU I knew I wanted to buy it. It has that beautiful red in the front with the somewhat cheesy but still awesome rainbow patterned sticker on the front like Machine Doberman and Machine Bull from the original show. I also like how this thing fits together. Aside from a few white lines like on the logo's on back and front you can't really say its not a one piece car. I've decided not to take photo's of it (lazy) but the lights and sounds on this thing is epic! I like how much it looks like the lights on the actual Dekaranger mecha. And my only strife with it is that they didn't do much with the lights. They could have let the lights go on and off switching from left to right like on a actual siren does. It would look nicer then just the regular on and off. 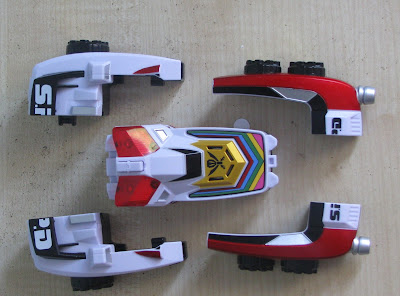 Any way lets take this police car apart and move on! ^_^
Deka Gokaioh 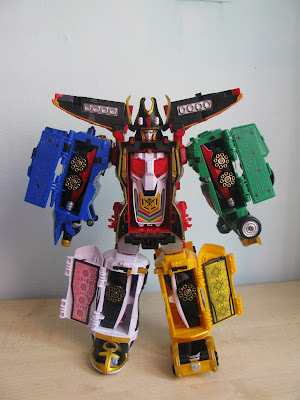 I find the fact that you have to take it apart and open everything up a bit of a downer. If you put the middle piece in its button will be pressed down and it will make the sounds before you plan to lol. But when spinning that wheel on the back its worth it with the awesome gattai sound and the cool finishing sound which actually does sound like multiple bullets instead of just one sound that's really scrambled. I love it! 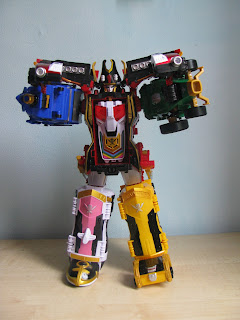 Well this mode.... I do compliment it for the fact that the guns actually do look like the D-magnum from the side. what I do dislike though is that the left arm has that stupid canon in the way again and the other arm isn't holding it that great either.... Still at least they tried! I hope the SRC version fixes this problem. :) 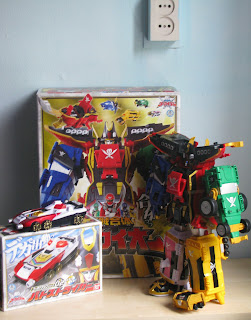 And that's my Pat Striker its something I loved buying it, and it did not involve my wallet being punched in the money bags till it bled out those precious dollars.... Unlike what I still have to pay the shipping costs for.... O well that's for another time. See you in the next blog xD
Gepost door Kelleth op 16:11 2 opmerkingen: