So yeah after a 8 years hiatus they finally released episode 5 and I loved it! Its good to see the crew back this show has been interesting since the start. My French sucks but I could understand most of it. Non the less I'll try to keep stuff mostly spoiler free :3 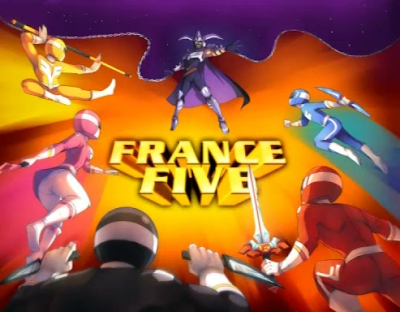 Even though it was filled with stereotypes. I liked this episode, Especially how it introduces new characters who are not only interesting but also powerful.

http://www.francefive.com/
And the end twist was AWESOME even though I already spoiled myself by going to a website of one of the prop makers. The last episode will be Episode 6 which hasn't got an release date yet. 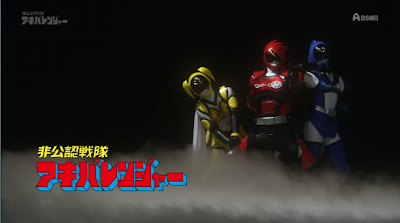 As you know this is an epic year for Tokusatsu,  Not only do we finally get a new episode of this ''Hikonin Sentai'' But also a EX series by Toei called Hikonin Sentai Akibaranger. Of course this is old news because we're sadly almost done with this 12 episode long show. And it just got so awesome that I want to put it on this blog... But because the subs aint out just yet: SPOILERS
Sad to see it go really. I'd really want to see a movie of this, Maybe with some actors doing a cameo. Maybe some Power Ranger references thrown it to it? :D Speaking of movies at least another Hikonin Sentai is getting a movie, This isn't news either but I don't care Imma post them all!!
Eito Ranger is supposed to be a comedy but this is looking great. Hopefully it doesn't disappoint. Though seeing how this is  Kanaji8 I doubt that is going to happen, all good actors who played in drama's I liked, and I have to admit that I like their music too. Not all but some of their songs are cool. Also is it just me or is this plot allot like Voicelugger? Eito Ranger is about a veteran hero gathering new heroes to aid him... O well at least they'll do Ishinomori justice :D BTW Speaking of Hikonin Sentai and comedy, The people who made Aikoku Sentai Dai-Nihon are also bringing out something new. A series... THAT ISN'T DAI-NIHON!?! 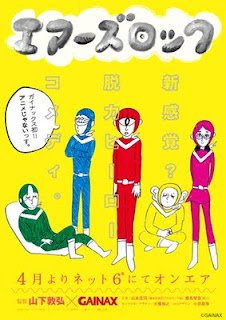 EA's Rock doesn't look like something I'd like. But then again its Gainax so its bound to be funny and wacky and borderline offensive just because we expect them to... But why make a new show? You should have gone all out and just make a sequel to the 1 episode you released so long ago. You don't even need to bring back the same actors since age is a factor... I guess I'll give it a try, after all we haven't heard anything about it since Gekidan's article on Jefusion.
Gepost door Kelleth op 17:10 Geen opmerkingen: