I had this dream this night So I can still remember everything like I should.

My family and I where walking in a huge city And I am pretty sure it was in Holland. My mom said that at least its not as lame as Rotterdam. Then we went around the corner and I said ''o here it is'' in Dutch of course. Seems we where going to this city to see the opening of a toy store of sorts. In front it looked like a Akihabra store but inside it was just WAAAAY bigger.  My mom said that they will get coffee back at Bakker Bart (which is why I knew that it was in Holland) And that I could check the store out myself. 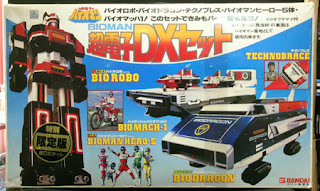 I walked in to the store and it reminded my of the V&D first. But looking closely you could see a whole lot of rare toys and collectables. I could see a section with old Furbies stacked on top of each other (must burn it) And a whole section for Barbies of all generations. A Lego section, a section for kid books, stuff like that. Any way I went up the escalators to the highest floor where you could see this just a gold mine of Japanese collectables, Takara Tomy, Bandai ect. I of course immediately walked to the Bandai Section for the Super Sentai and Kamen Rider merchandise. But not before walking past another escalator which let to a Power Rangers section. Seems in my dream Bandai America did want to re-release some Power Ranger toys, But for a price. they had a Ninjor new in box for €40. And a Ultrazord Powerpack for €300!! (all Dinozords) Also some sort of silver figurines that looked to be gashapons at some point. I took the escalator back down and walked to the Sentai section. In this dream I knew these where all re-releases sold at market price so I could effort at least one toy. And What did I find? The special Bioman collection pack for just €150? Yes but also the Super Galaxy Mega pack for just €60!! And I bought it in my dream... Wish it wasn't a dream though...

Any way then I walked to a special section where celebrities are giving out autographs to fans. I got a few from transformers voice actors. Though then again looking back it was weirdly quiet for an event where Peter Cullen shows up. I was not alone there it was pretty busy, but no nerds stood in line. And way representing Sentai was Tsuyoshi Hayashi aka Deka Blue. Who strangely enough also did not have much fans swarming around his booth. We had a little chat and this being my dream he could speak English (note: In real life he kinda sucks at it) We talked about SPD and how Sky is not as good as Hoji. He told be he's representing both SPD and Dekaranger and that he doesn't really dislike Sky. And then the weird part happens. I told him I was sad Ayumi was not there and that I would love to have her autograph. (something I would hunt for in real life) And then he gave me her phone number... Saying she's desperate. And I refused... Saying that I respect her privacy... He took it back and I walked to the escalators to look down. and saw that the store had like 8 floors of toys. And then I woke up with one of our cats having that time of the year again... -_-

I seriously want to go back to my dream and hit myself and Tsuyoshi. Aside from Tsuyoshi being a traitor in my dream and me being weak. This dream was almost perfect xD Okay guess I'll do something else now :3
Gepost door Kelleth op 12:09 Geen opmerkingen: