Another mecha I got in the box is the Dino Stegozord 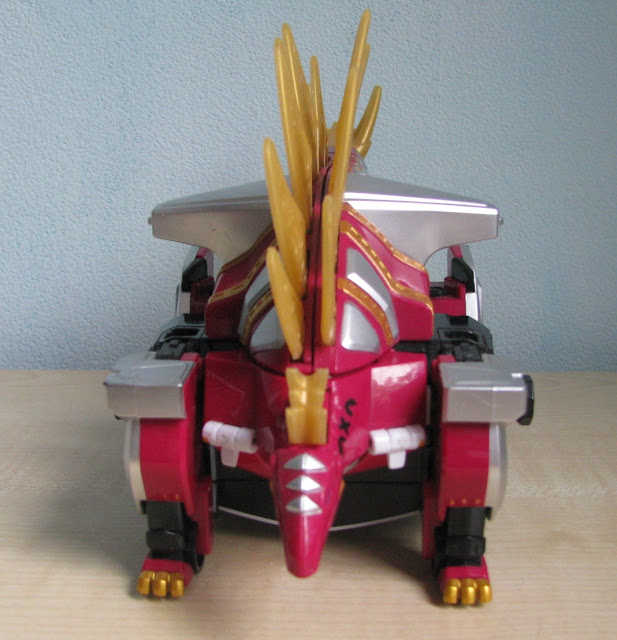 I like the Stegazord. Even though its bulky due to the battery case and the ratchet mechanisms in the chest.

Despite those this thing looks almost as natural as the other Dinozords. Though I do not care for the fin gimmick on the back. Its really annoying when the button in the neck gets pressed out and the fins moves. 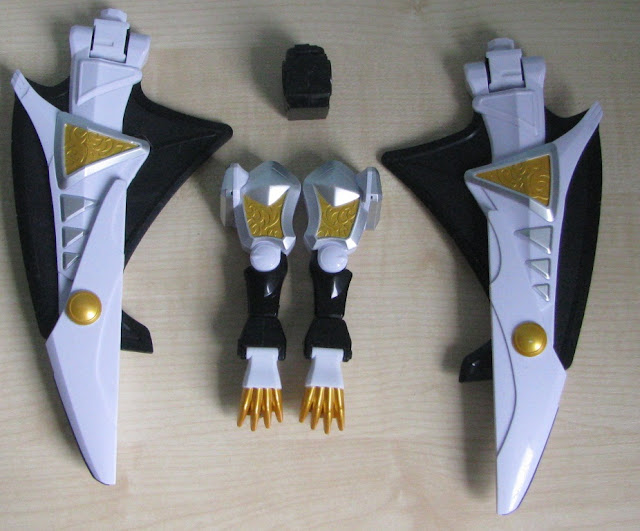 Sadly I am missing the vital middle piece of the Drago Zord. Which forms the main body in zord mode and the spear in the Megazord mode. 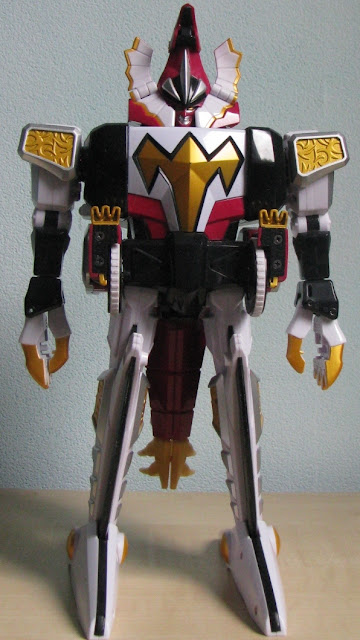 One thing I am annoyed at with this Megazord are those legs. Like the new megazords it spread its legsto take in space 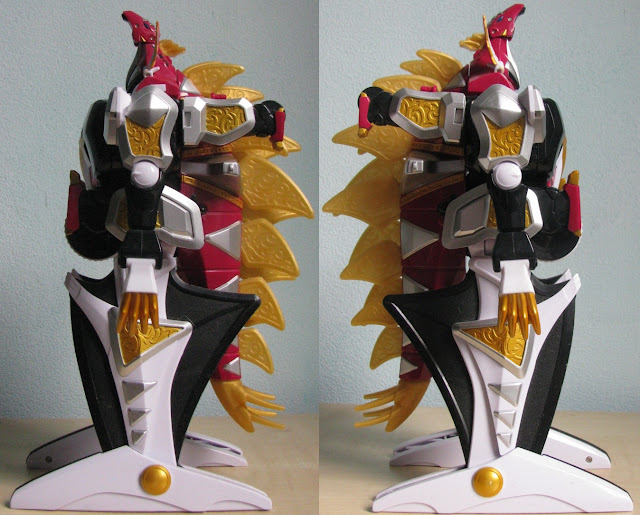 But that isn't the worst offender on this thing, Nope its the feet! which are long on both the back and front. combined with the fins on its back and the black parts on what are supposed to form the wings on the Drago Zord make this thing really fat. Normally I have space left on my shelf's but this thing takes up all that. 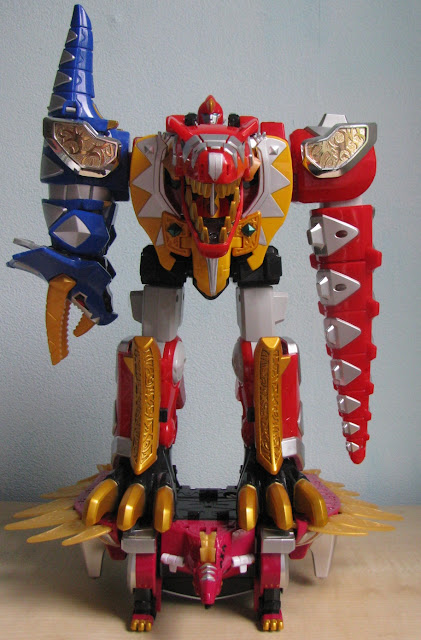 As for the combo. I can really form the Valkasaurus Megazord. I am missing the part that actually forms the wings on this thing. So it feels really incomplete.
Arm Switching!! 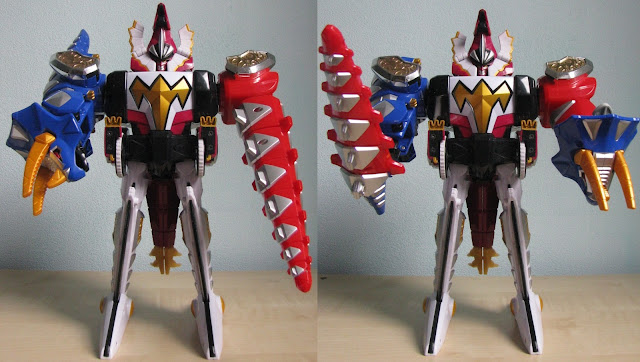 Though arm swapping is fine. Not surprising since it was the gimmick of the show. 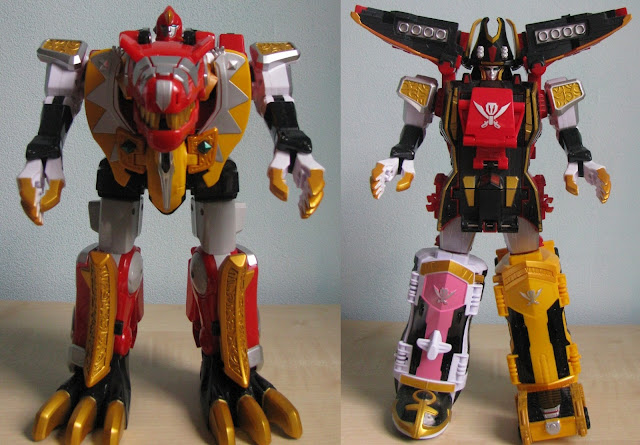 But I do like it when it just looks wrong lol 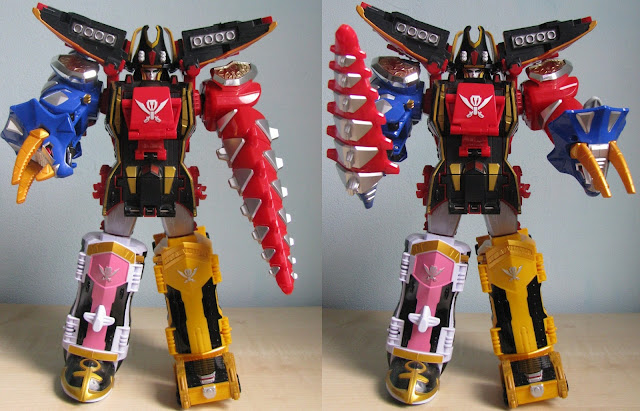 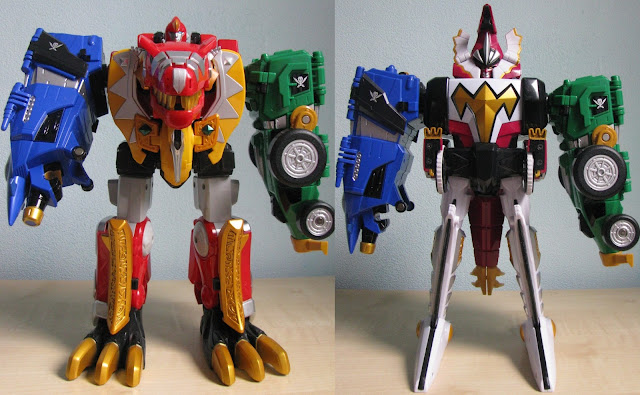 Though these keep popping off they do look funny xD

Okay this filler is done. Hope everything arrives so I can finally move on!
Gepost door Kelleth op 15:00 Geen opmerkingen:

With my Power Morpher I got two megazords, one of them is my Dino Thunder Megazord. Buying this box was a good choice. Seeing how I got an original morpher and a bunch off goodies for €30 from France within 4 days. 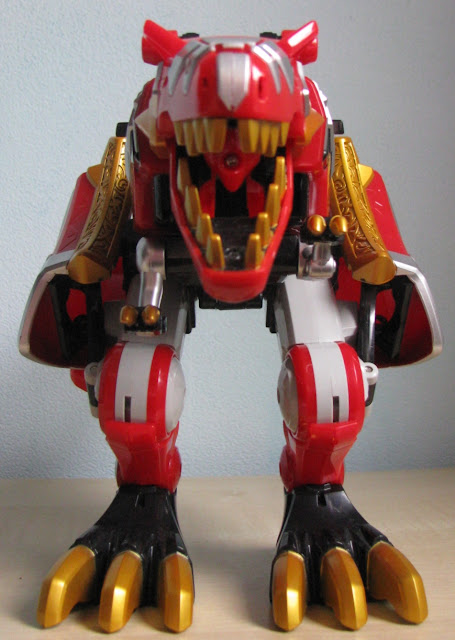 So Tyranno is pretty much complete. First I was worried that the batteries where rusted. Like the ones from the morpher where. But thankfully its not the case.

I like this zord. Its one of the most poseable Zords ever. And though I usually keep it in Megazord mode, I do like to toy with it a little once in a while. The drill gimmick though. Not really a fan of it, Same reason why I did not run to the online stores to get a GoZyuJin. Also I keep hitting the button on the side. So I keep the batteries out. 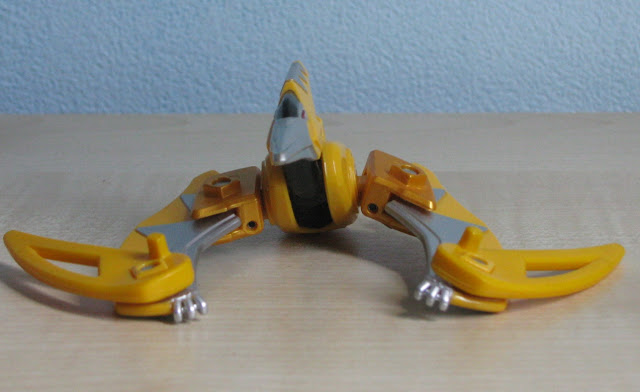 Ptera is sadly incomplete. Because I am missing the helmet. So I am holding her in a kind of normal Ptera crawl mode. I do love this design.

But I am missing the helmet in this picture. So I am going to try and buy a new one sooner or later. Not much else to say about it. 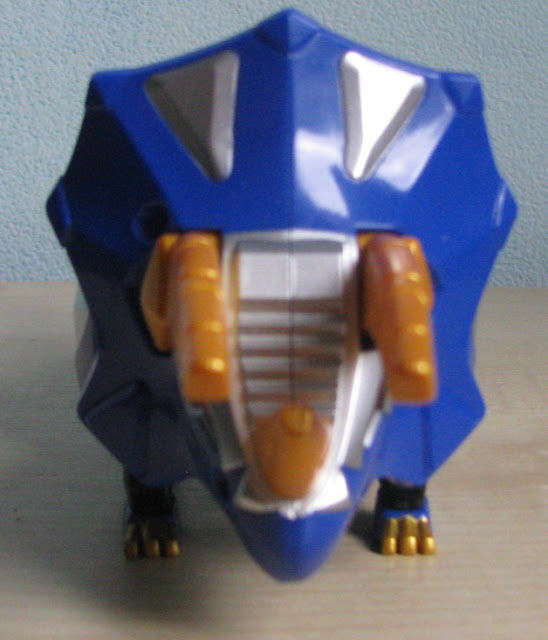 Tricera is so awesome! I love that Bandai America kept the diecast horns and gripping effect. Even though it sometimes causes the head to pop-off for no reason.

Overall though I do love the Triceratops Zord but I think this is an real improvement over that old tank lol. 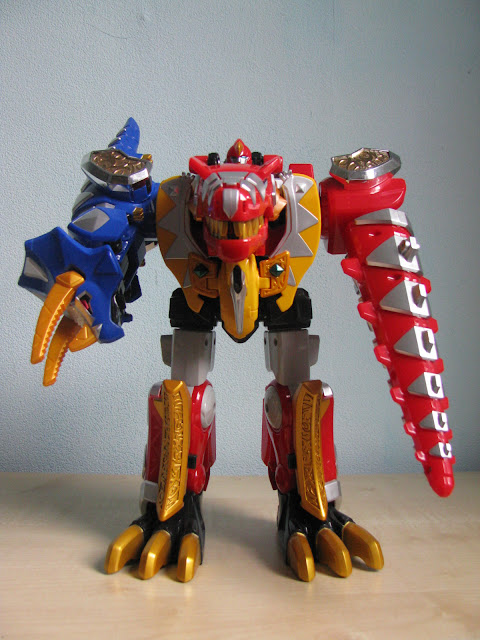 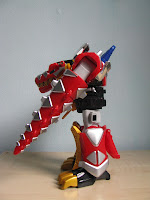 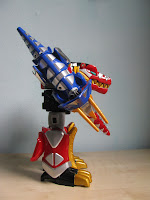 The Dino Thunder megazord is cool. Though the tail part of tricera keeps getting in the way on the shelf. Either was I do love that I keeps some of its posing abilities. And the drill arm looks awesome. Then again It just doesn't fit on my shelf! 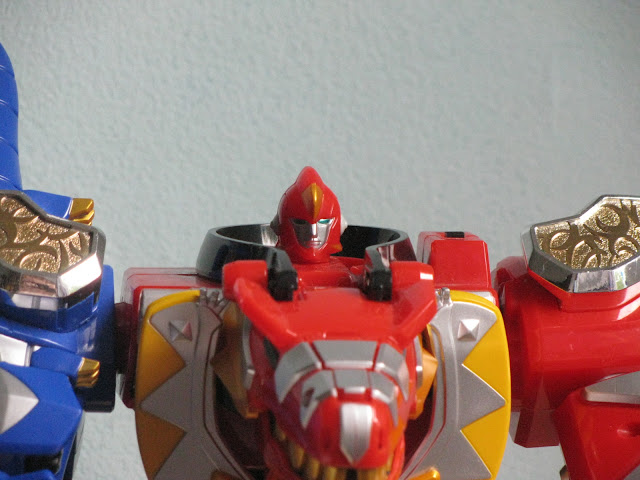 And as I said. Its missing its helmet. So this should not be the completed mecha! 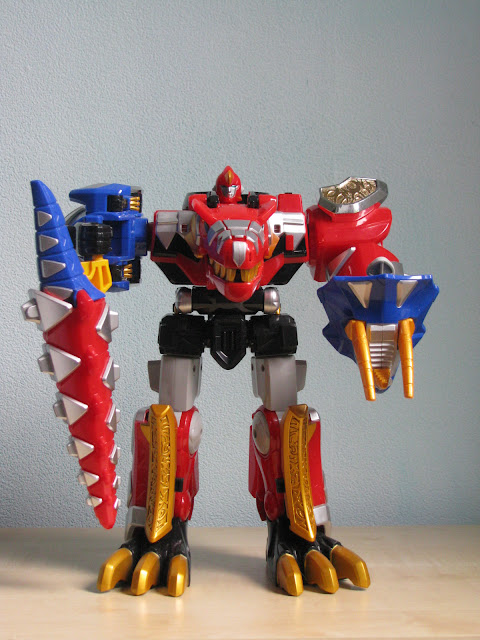 Instead I usually take Ptera off and make this dude which was only formed once if I recall correctly. 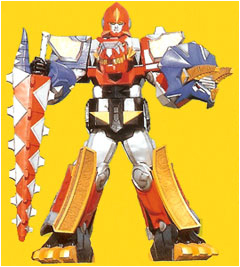 AbarenOhJi
Which is the formation of just Tyranno and Tricera. I can't even recall if it was in Dino Thunder. But then again all I remember from DT is Tommy being awesome. lol Any way this thing improves so much for me. For one thing the Tricera tail is out of the way. And this is a complete formation. Also it makes room for more mecha because the drill is out of the way on the right.
MV made by TheIchipai  ©Toei LTD
That's pretty much all I got to say. Sad that I don't have a box for it. But then again this megazord is designed so be split up in tiny little pieces and that's pretty much how I got it. Its pretty handy. Any way next time I'll post some S.H.Figuarts or something Chinese whatever.
Gepost door Kelleth op 12:56 Geen opmerkingen:

My Small Collection of Morphers

When I was young I never ever got a chance to buy a morpher. When I was older I never came by morphers because Bandai Europe was run by idiot trolls who stopped selling Morphers when Zeo Started! 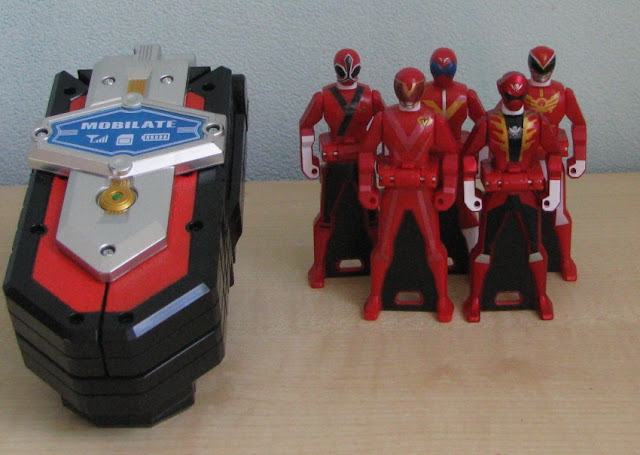 Now though I got more then enough morphers in my collection. Like my Legend Mobirates I blogged about earlier. Or the Armor Hero stuff that don't work because they are bootlegs. 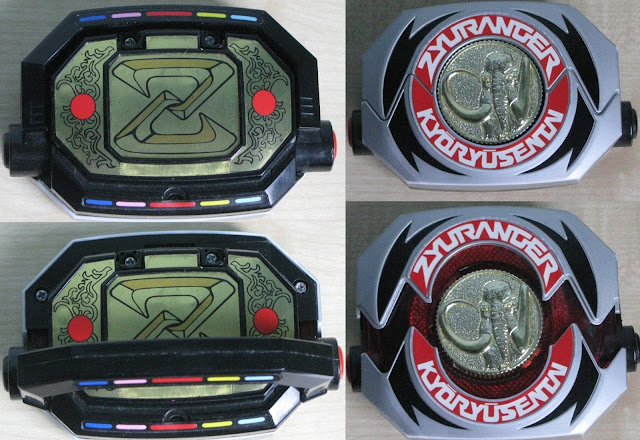 But the one I am most proud of is my normal Morhper which I bought in February (kinda forgot how long at it actually was lol) It came in a box with 2 megazords and some small stuff. But it only had the Mastadon coin. and of course its not a Dyno Buckler. Nope I bought Reprolables as soon as I got this thing. But first I attempted to fix its faults. For instance. The batteries in it where almost rusted away. And the red part under it was greasy a can of fat. I got 3 of the 4 screws off and cleaned one of the plates in hot water. One of the screws was broke when I bought it so I had to clean it by soaking and rubbing (giggity!) it. It worked out great! I even managed to get it working for a few days. But the sound started to decline and the lights arent even working properly. So I removed the batteries out of fear for rust. Any way I love this thing and I hope to get the 2013 morpher too!

Abaranger is one of those of which I kinda was disappointed at. For one thing Its the one from Mainland China and it doesn't work quite as good as the original and its American counterpart. Instead of making a Dino/Flying Reptile sound when opening and closing the mouth parts. It makes the sound when opening. And when you close it this thing will go in to call mode. This is annoying. You'd think the Chinese would get this right. Just switch around the effects. Or put call mode where its actually supposed to be, which is when the mouth is closed and you push the button!. 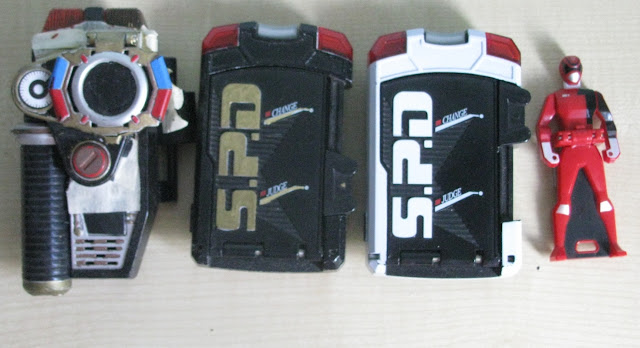 Next up are my SPD morphers. I got 2 normal ones and 1 Battlized morpher. They are okay but they could have been better. My first gripe is the sound. Dekaranger was pretty much one of the best Sentai's with their sound effects. And this is pretty evident with my Gokai Patrol Striker. But ALL of the SPD morphers are really really quiet. Bandai America failed there. Now my Battlized Morpher on the other hand is really good. But then again all I got with that is a small LED that goes on and off when you grab the throttle... Also Yes I painted my morphers. First just to fix some scratches. And then to make a Master Licence. and then to make my own morpher. Sadly I got disinterested in the painting stuff for the moment. So its been left for the mothballs. 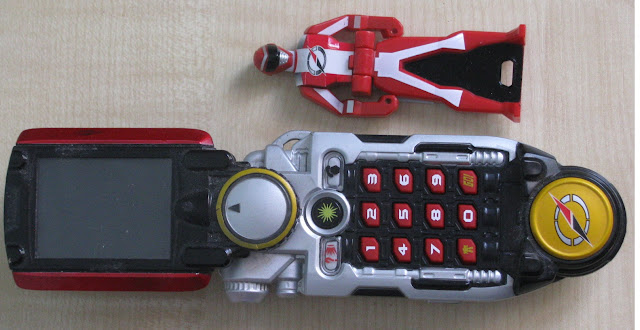 My first morpher is the accelerator from Boukenger. Well from Power Ranger Operation Oversuck... Its not bad. But not worth the money I paid for it. Which was €18. Inferior plastic and an annoying piece of cardboard instead of the codes on the original. Sounds are okay. But I miss the Go Go Goooo~ part when you call for the Bouken vehicles.

Some Other Stuff
And this is what else I got 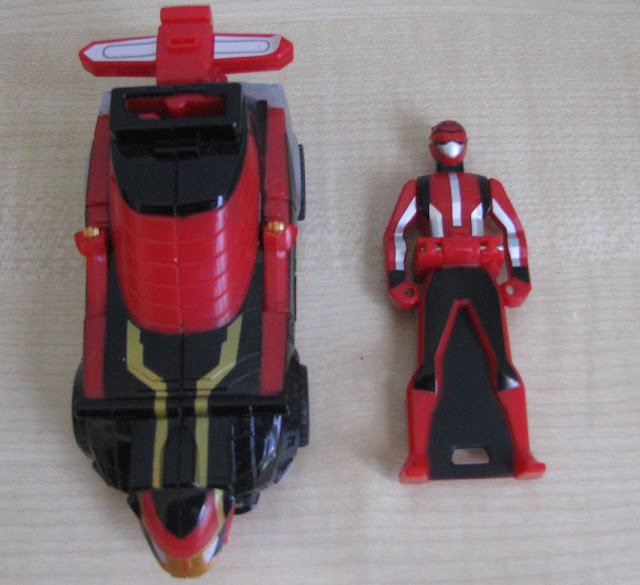 As I was saying on the Legend Mobirates blog. I got this Ride & Go Machine in order to get the Red Buster Key without having to buy the DX Gobuster set which gets sold out constantly. 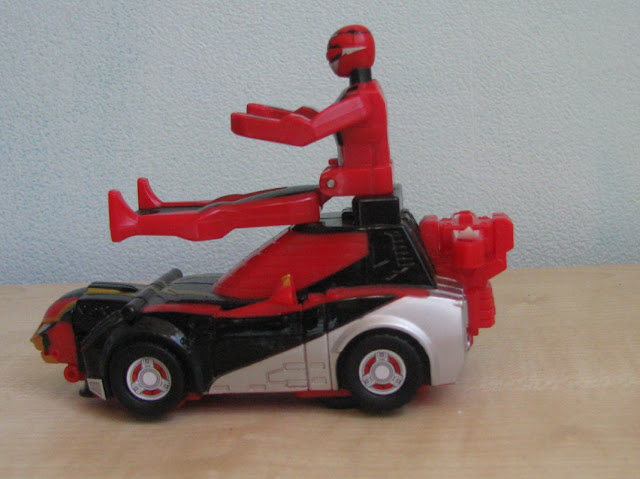 Its a cool thing. But to be fair. I kinda leave it in the box most of the times. I shouldn't have put the stickers on either. I don't really like shelf fillers. And I have to many already. 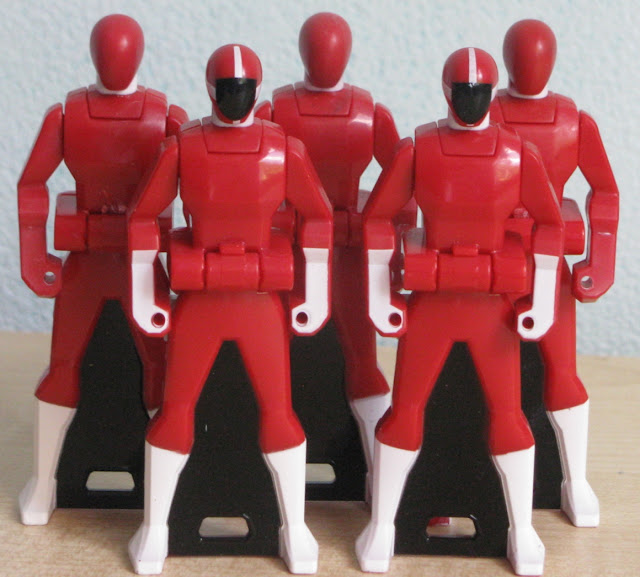 Speaking of Keys. Here are my 5 Go Red Keys. Which I was planning to paint, Sadly I am being lazy at the moment. And I still need to find the right paint for some. 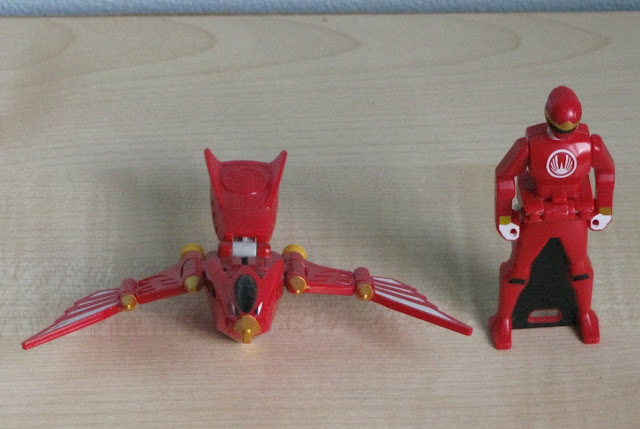 And lastly something I got in the Box along with the Power Morpher. The DX Hurricane Hawk. I have no idea at all where the Shinobi Machines have gone. But I am glad its in here. This thing is so well made.  At first I could have sworn that the main body was made out of Diecast. 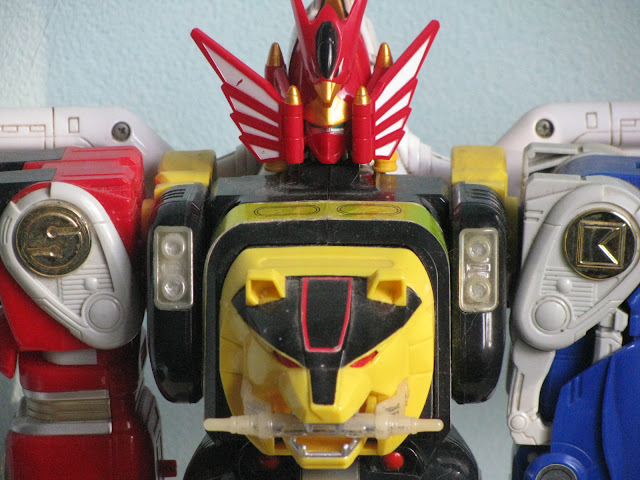 Sadly I don't have much use for it. Other then a display piece or to joke around with my Ninja Megazord. (which I should dust off) If I get a chance I'll buy a Storm Megazord complete that is. I don't really care if I have such a small thing two times.

Any ways. I'll be posting another Megazord from the box next. Bye :)
Gepost door Kelleth op 09:21 1 opmerking: