And now we have reached the final blog. This time for the combinations of the two mecha. 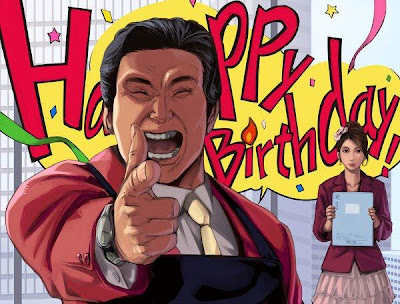 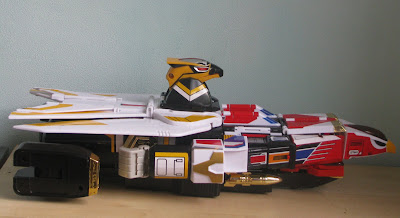 Hyper Haken is in one word HUMONGOUS!! The worst part is that this is the way it was packed. Clipped on a huge cardboard wrapped in foil paper. So this might be the big reason why some parts and stickers where scratched. I can't say its not awesome though. I do like it when you spread out Garuda's wings making it even bigger. The only real difference with this one and the official version is that this version has a huge piece of plastic that you can clip under the formation to keep everything together. The sad part is those damn rockets!!
They are not supposed to be there. And it doesn't exactly look good. Which is why I plan remove them at a later date.
GATTAI!!! 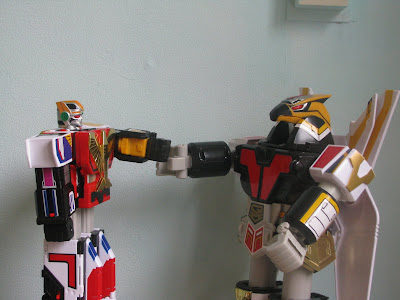 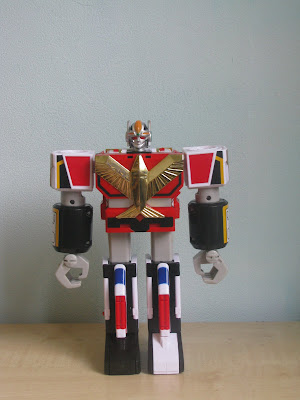 Just kidding!! xD
But in the light of the Abaranger Tribute of Gokaiger I just had to try an arm swap xD It does work though! And it does actually look pretty cool with them :)
GATTAI Great Icarus!!! 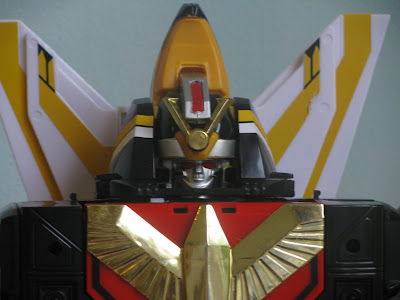 Man this thing is awesome. Sure there are stickers missing on the wing design that takes some of the awesome away. The arms are still switched around, and the blue on Jet Swallow is still to dark... The legs are not really clipped on that good... So bad in fact that picking it up lets them fall off... And lets not forget that the Garuda head hasn't exactly got a clip to begin with... And that the wings on the back are now unmovable because of the wheels on the back of Great Icarus.... But the size of this Sentai mecha awesome thing make up for all that!! This thing towers above all the Megazords I have!! And due to the Owl and Swallow clips it does make it somewhat more posable almost like the arms on the Thunder Megazord :D
Size Comparison 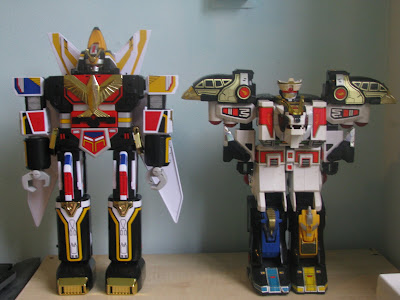 So now it also owns my Tiger Megazord in size! Yeah It really dwarves everything I ever got (Should have bought that Fortress Maximus) 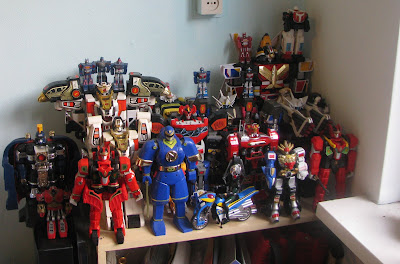 My collection (not that this is not really my full collection) is growing pretty fast. And I hope to be able to blog about Gokaioh on Talk Like A Pirate Day. But I think I am not going to make it... We'll see, Bye! :)
Gepost door Kelleth op 12:49 Geen opmerkingen: