So instead of buying S.H.Figuarts of Akiba Yellow & Blue, I decided to get something from Bhiner instead. I got 7 figures out of this, so I decided to do 2 at a time for 4 of them. Lets get started!

Ultrabeast Force
At first I thought it was a sequel to the abysmal GodBeast Megazord. But its luckily not, It actually gives me more Voltron flashbacks then anything else. And I don't mean the awesome original one. I mean the 3d crapfest that aired when I was young. But this is one of those rare Chinese shows where I can see clips off and see that's its not a complete shit pile. I could enjoy this show if subs where provided. The designs are decent, Maybe that's because they stole a few hints from the Gransazer's designs for the suits and henshin devices. But I can forgive that. The villain looks good. Then again he's just there to die. So I can't really say much about him. But the heroes aren't that horrible. My favourite so far is the FenYin Warrior. She's so feisty xD But sadly they did not make figures of all the heroes. Just the main 3 and the Rio knock-off of the show. And the Yellow one got a vehicle release. So no Yin Warrior for me.... Any way instead I went for the Red theme. So here's the red warrior: 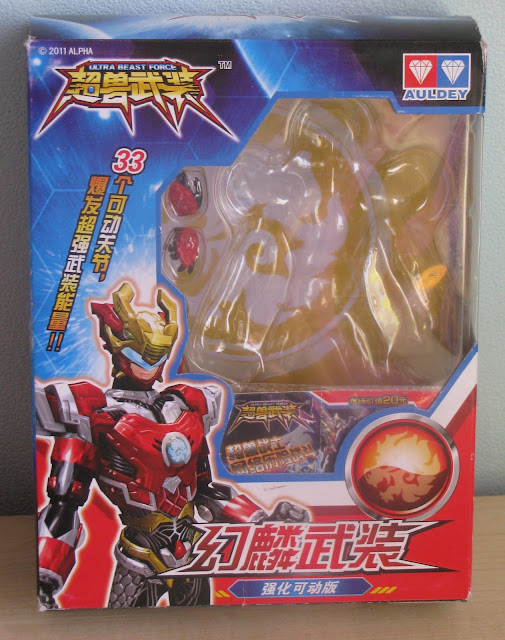 Or rather the box which is the 2nd best surviving one in the haul. Its also the one which gives me the feeling that it at least has some quality to it. 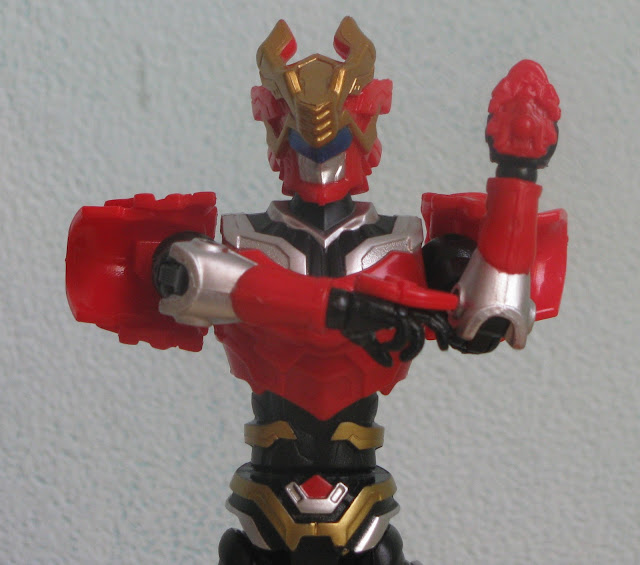 The figure itself looks awesome. As I mentioned before it borrows allot from Gransazer. Especially the weird helmet with all the spikes and stuff lol. Sadly one thing it has in common with all the the figures from China. It missing ALLOT of paint. I seriously want to get started with Gundam markers so this can look like it should. 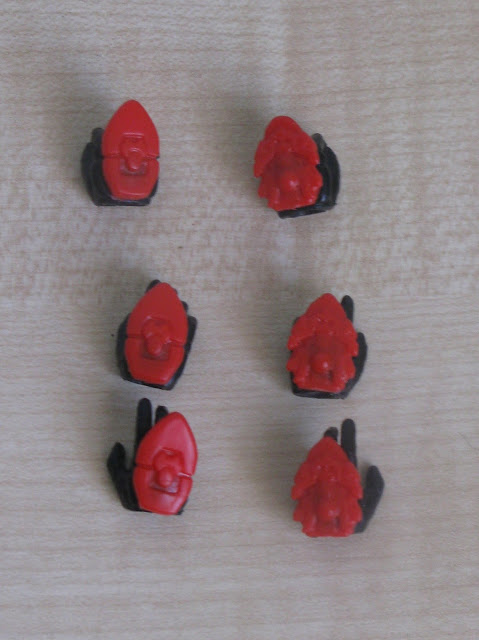 It doesn't come with weapons sadly. As they apparently stick to martial-arts in the show. It does look like and okay selection.... Then again they all boil down to about 8 to 9 martial-arts poses that can be mirrored as you have 2 of each. 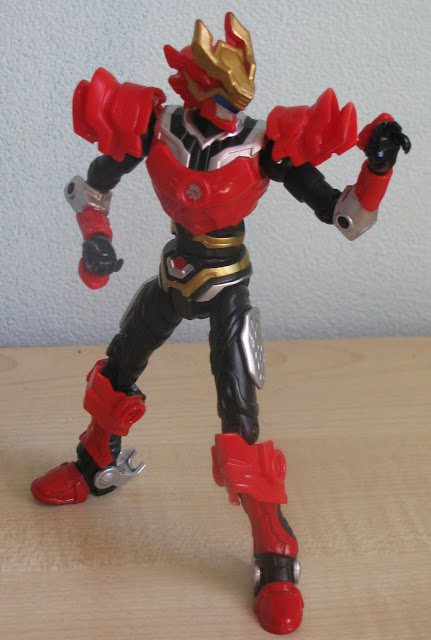 Articulation-wise its so damn awesome. Because its from Auldey it follows the same articulation designs as the fake Jochaku henshin figure I just posted. Only its head isn't stuck due to the armor. so that's a +. 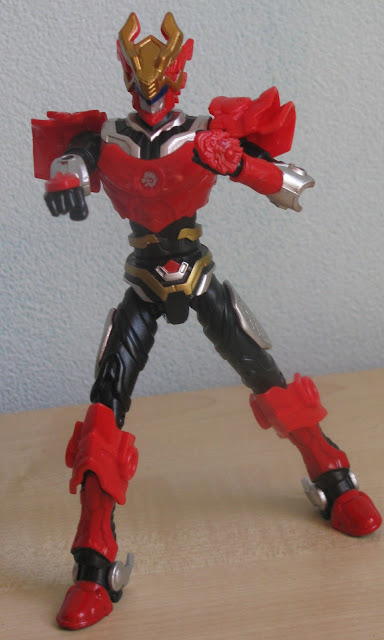 Its also because the diecast armor-piece isn't in the way, the chest piece can be turned better, to a point of it being bit to loose. It not a bad thing but it does get annoying when wanting to let him stand straight. Going down he has another way of turning by having a swivel that connects his stomach to its thighs. Sadly for some reasons its some kind of ratchet allow only like 5 positions one 2 of which make it look natural... 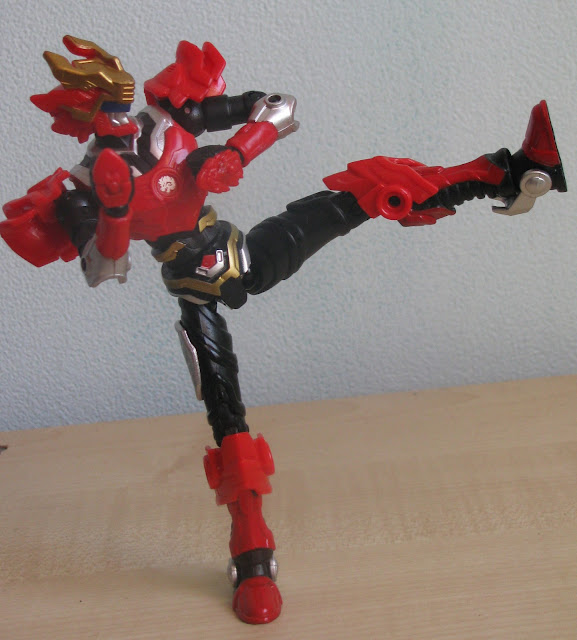 Going down even more, I just noticed it got those cool S.H.Figuarts hips that can be used to broaden the leg poses. If only the feet where more articulate. They are on ball joints but the sideways movements are almost non-existent. Though it can do a high kick and keep its balance so its not that bad 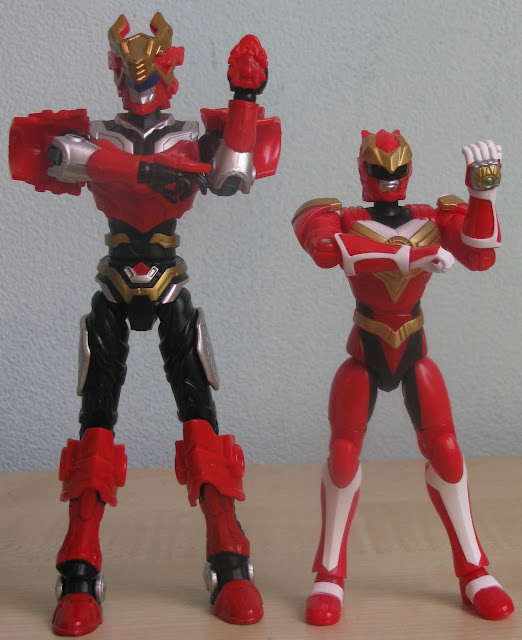 Overall a decent figure and better then most non-Japanese figures that can be found here. Its articulations is close to that of S.H.Figuarts and improves on the Diecast Armor Hero Figure. If only it had some weapons. then it would have been a 10/10. And again I cannot stress this enough. I want a figure of her! 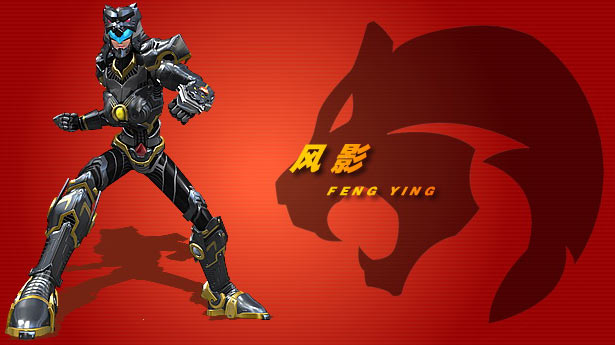 Dragon Force
Dragon Force looks good too. But this is one of those trailers where you don't know ANYTHING about what the hell they are supposed to be fighting. As far as the extended trailer could tell is that they are more spies then anything else. I think this show has to much going for it. So they are not only skilled spies. But also a Hikonin Sentai, who can summon vehicles at will, and do a ''Man and Machine, 'Power Extreme'' Routine which those vehicles. And worse yet. They can use those core-thingies they use to transform with to Transform in to full-on Cybertonians who can combine in to an even bigger bot. And I wasn't kidding about the Cybertronians part. The Red bot you can see here doesn't look familiar at first. But with the toy you can turn the antennas up and its Optimus Prime. I am dead serious, They ripped off Optimus lol. Going with the theme of Red's I decided to get the Red leader of this team too: 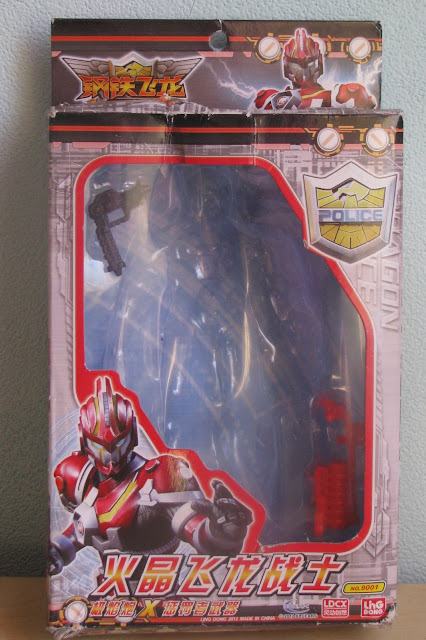 This box got the blunt of all the damage. I had to fix it with allot of tape. And even then I cannot fix that dent lol 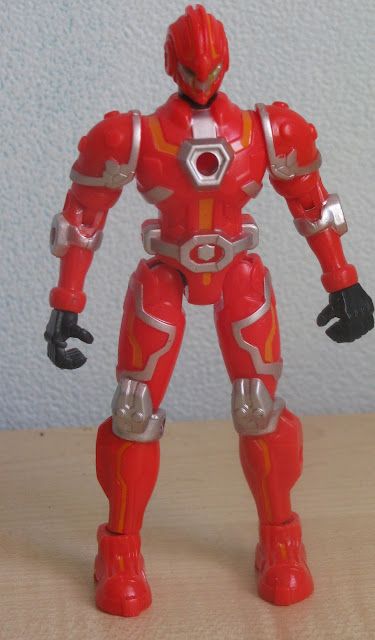 If you look at the box art you can see WHY this need paint. All the impact of this figure is dimmed down by having to much red. And it would look so damn awesome with that little bit of silver its missing 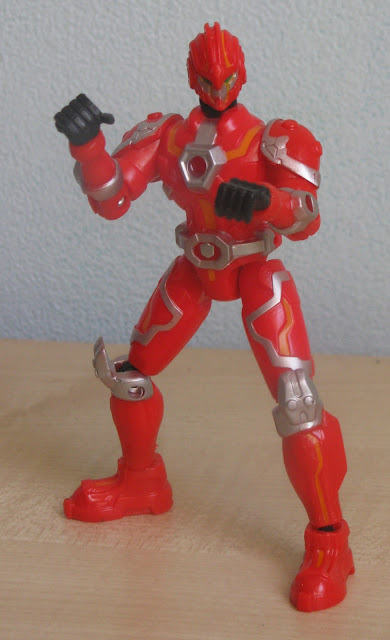 This thing got screwed in the articulation part. He has no should joints, at least his only go up and down. Neither does it have a stomach joint. So from the top he's pretty much as stiff as a twig. But his legs though look to be on par as the last figure. He has outward going leg joints which are a a bit stiff if you want him to kick or sit. His knee joints though. Man they are awesome and annoying as the same time. They are on ball joints on both sides. So you can do some awesome poses but sometimes you can displace its knee when one doesn't notice it. Like I did in the first photo lol. His feet are just brilliant. Unpainted and brilliant. 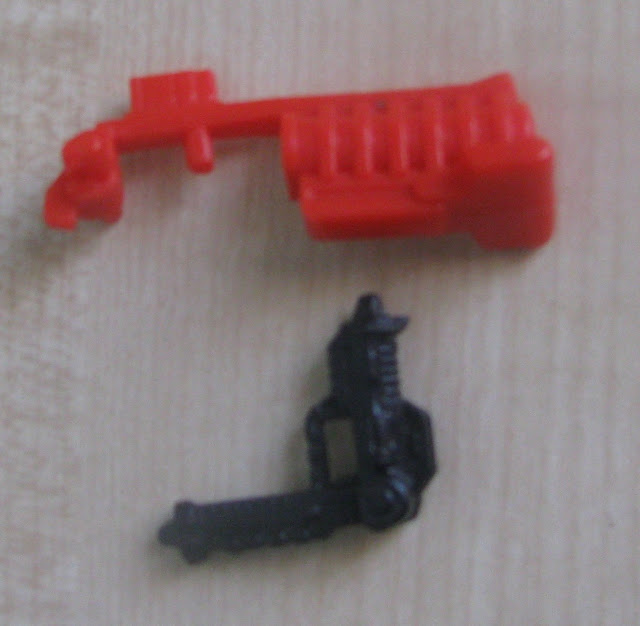 He comes with a gun and a weapon that looks nothing like it does on the box and that he cannot hold for some reason. The red thing can go. Worthless. 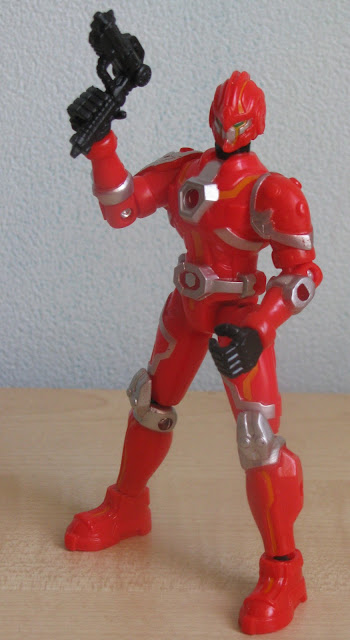 The gun is just as worthless as some smart ass-hole forgot to make a trigger finger on the hand. So he cannot hold it like he should. Making it you guessed it: pointless to add... 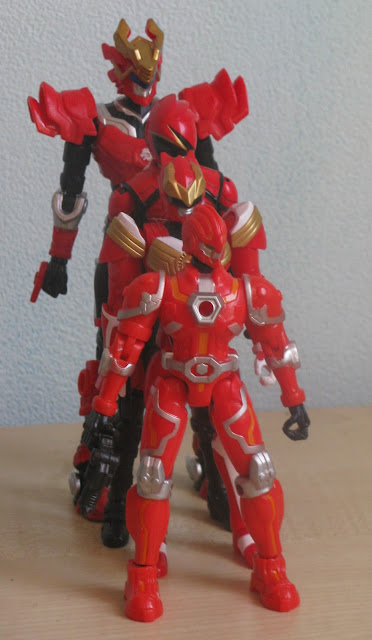 Last I want to note is that he is the smallest Red I got to date! He's even smaller then Sazer Tarious! xD
And that's about it. I think I'll do a Rider next :)
Gepost door Kelleth op 12:42 Geen opmerkingen: