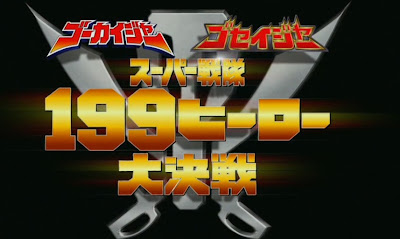 I stayed up yesterday to watch this movie and its was worth it! It owns Lets Go All Riders in so many levels!! I loved  how they made it possible to call on all the Sentai without Basco and I love the new look of Black Star Fuhrer. It has so little faults. But the main one is the title 199? there's still allot of heroes missing and even with those counted there's still not 199! The main problem I have is the fact that Ninjaman and Gumajin are missing from the *extra* heroes line-up. (more are missing but I care the most about those two) You could argue that at least one of the two could be counted as an extra mecha but that still leaves Ninjaman who in all respect would have fitted in more with the extra heroes then Zubaan! Any way I love the fights even though they do the same old *splitting up to beat the enemy* trick they always used for these anniversary movies and team-ups. And the last battle is just EPIC especially because of the music that was used!

Any way have some Super Sentai Roll Call:
The raw was provided by Gustavaum from TokuRawRevolution even though I downloaded it from somewhere else. And the DVD will be released on the 21st quickly followed by the fansubs provided by Overtime and Grown Ups In Spandex. (and next year maybe TV-Nihon too) Seriously go watch this movie!!